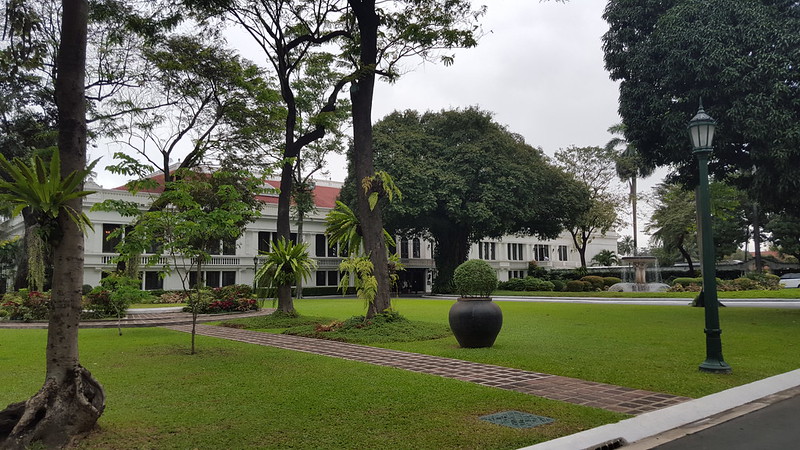 I has been almost half a year since this happened. I have been that absent from my blog. Oops. Blame Instagram.

Back in January, I got a call from an agency handling the launch of ASEAN in Malacanang Palace. They asked me if I could host the event. It would be attended by the President, his cabinet, the diplomatic corps, and the business community. 2017 is a big year for ASEAN, being its 50th anniversary, and it is hosted by the Philippines. Needless to say, I was honoured and thrilled to have been invited as the emcee.

Here are photos and screenshots from the event. And because a lot of people asked in Facebook and Instagram, I will highlight my fashion choices. I do not work with stylists for the simple reason that I enjoy dressing myself and making these creative decisions myself. 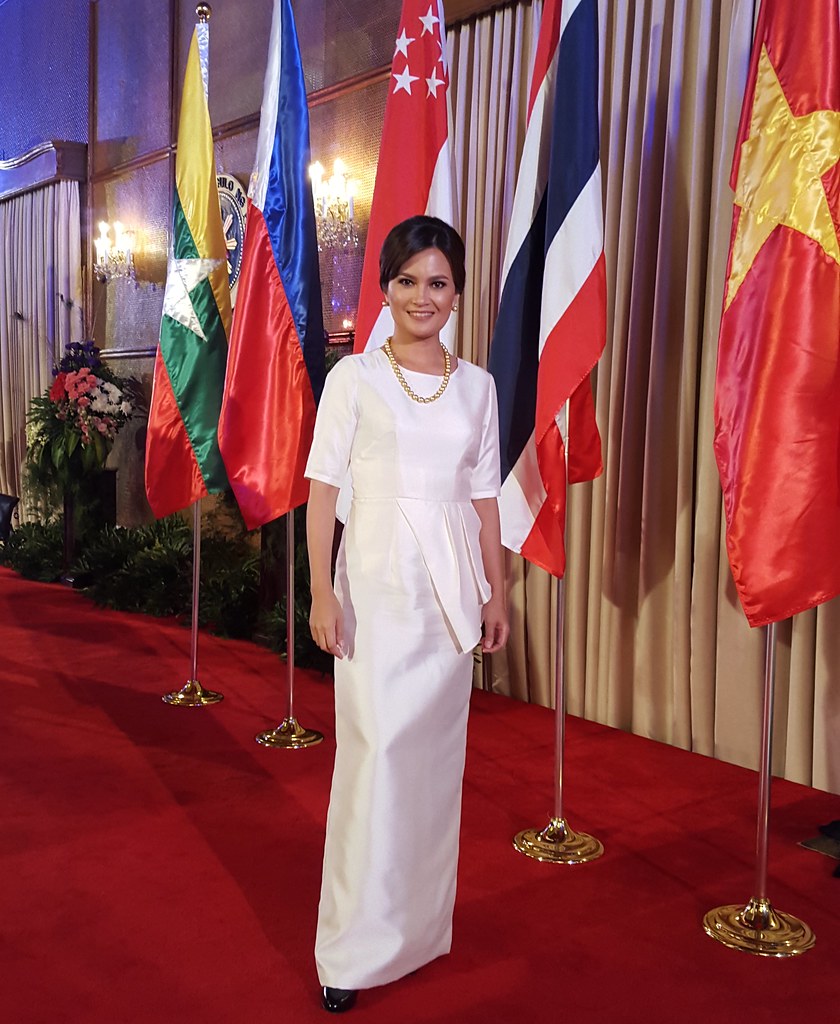 Me in my long white dress and golden south sea pearls, at the launch of ASEAN 2017 in Malacanang Palace. 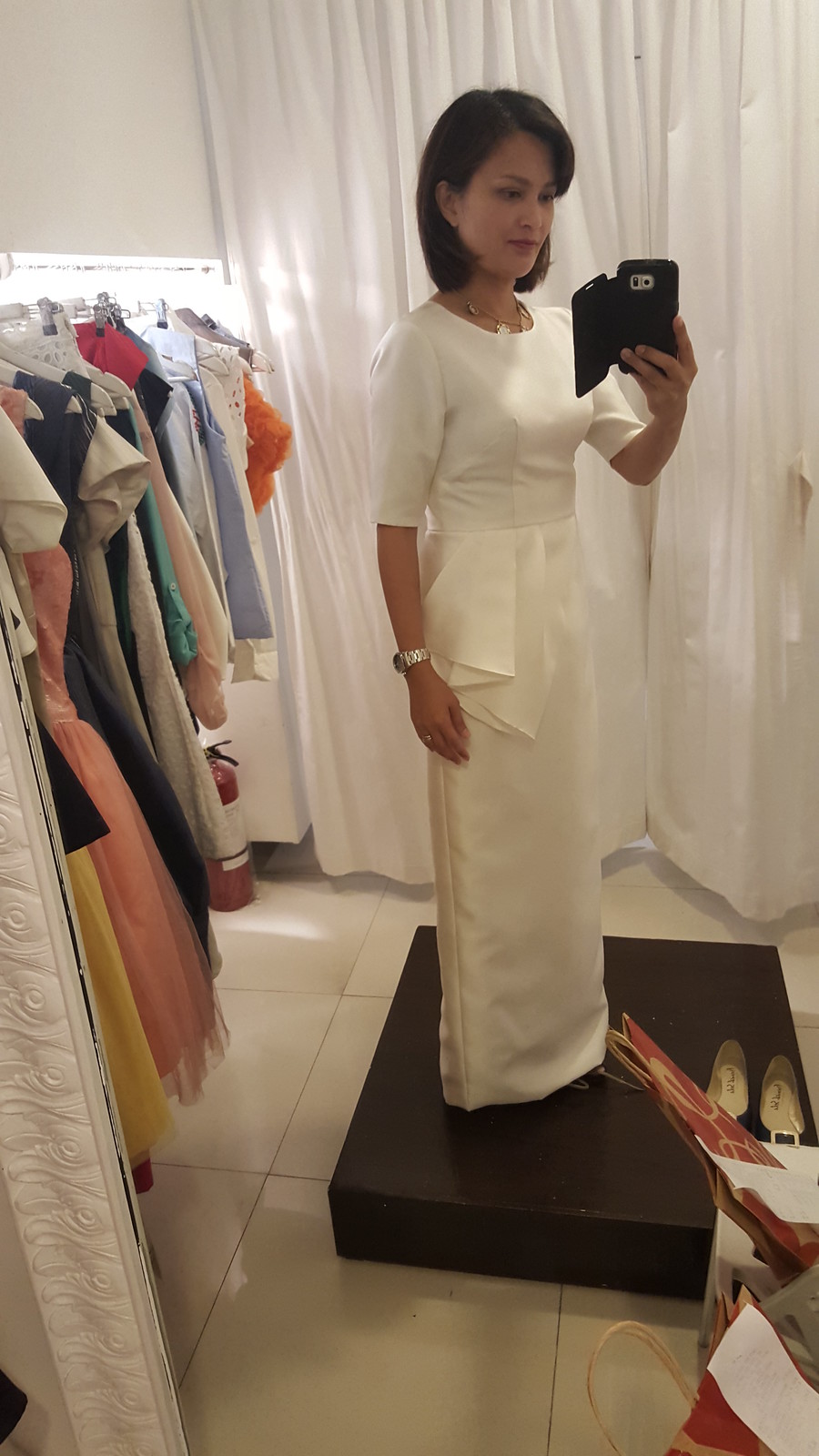 Fitting my dress in Religioso.

I was asked to wear a long white dress but not a gown. They wanted sleeves that went down to my elbows. It was a challenge because I only had a week to plan my outfit and have it approved by the client (i.e. Malacanang). I scoured the malls to see if there is anything off the rack that I could wear. There was nothing. I remembered loving the black knee length dress that was worn by Valerie Trierweiler when she was the First Lady of former president of France, Francois Hollande. (Valerie was our guest a year before that. She was a patron of the organization my daughter Sophia was a part of. We met each other in France, then in Manila.)

Religioso came to my rescue by offering to make a version of Valerie’s dress for me. We used white silk crepe. I had to make sure the skirt fell like a column and that it barely skimmed the carpet when I’d wear my black pumps.

I wanted to stick to the classics, so I was sure I’d wear a strand of my own Jewelmer south sea pearls — either in white or gold. I actually brought both with me. But when I put on the golden strand, the decision had been instantly made. Aside from my stud earrings and single strand of pearls, I kept everything else bare. 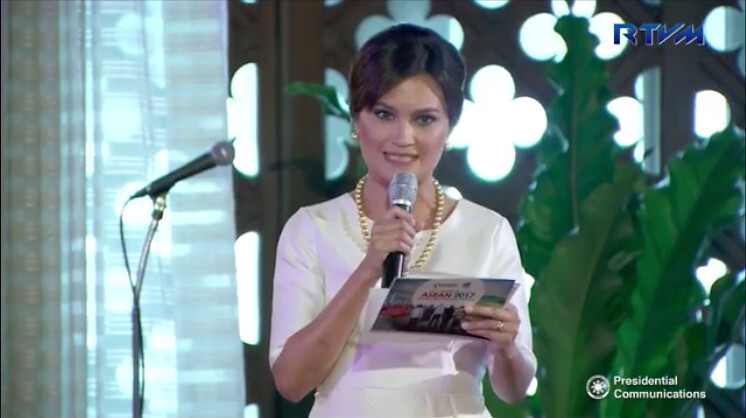 Screen shot from the Presidential Communications page in Facebook. 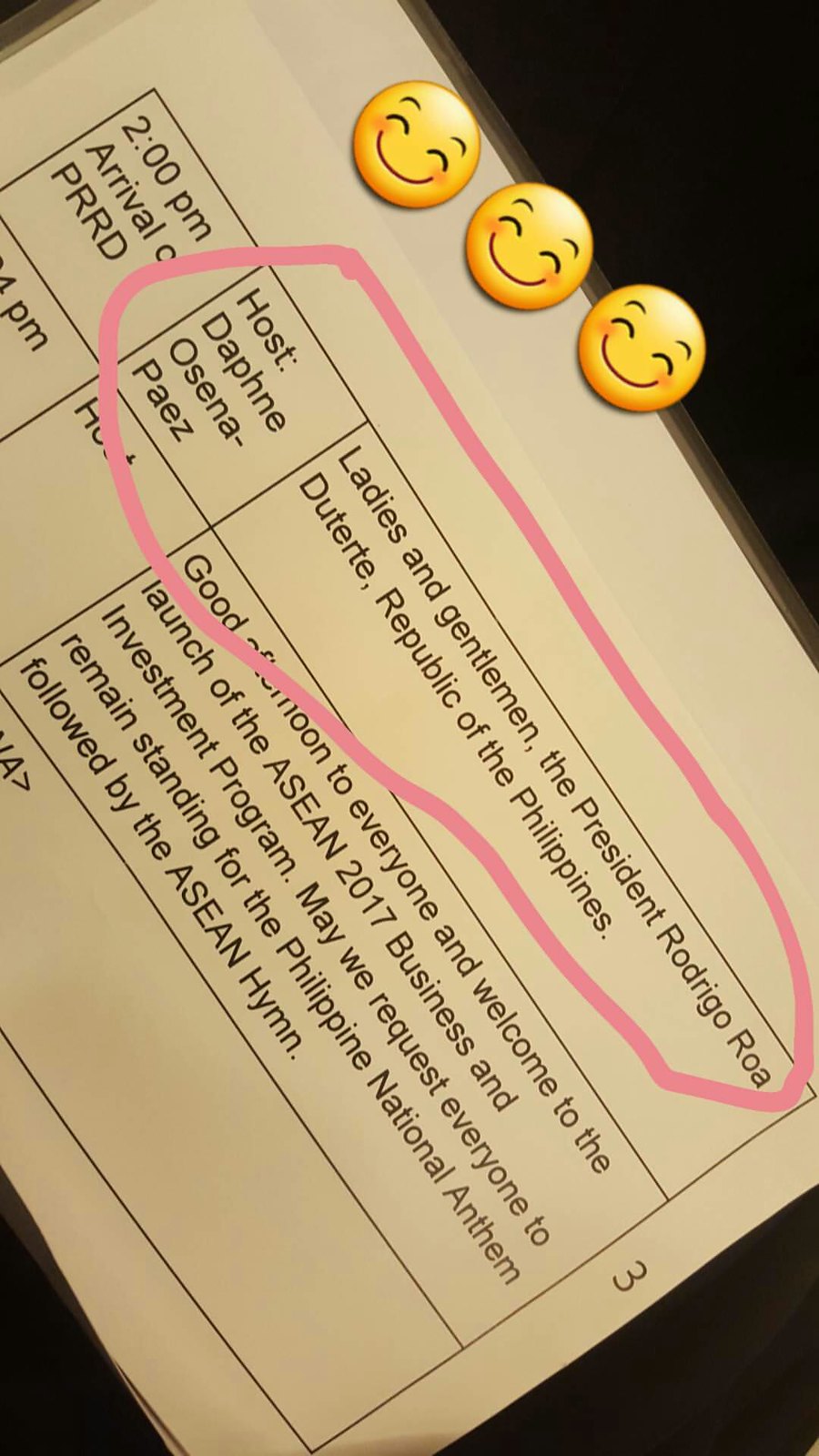 My script was simple and straightforward. But I find that the simpler things are, the more nervous I get of mucking things up. You never ever, under any circumstance, want to mess up the president’s name. Ever. So I practiced that in my mind over and over. (Side story, the initial script said “His Excellency…” as heads of states should be announced, but the presidential staff edited it and kept it simple this way. Apparently President Duterte prefers it this way. In fact, the Executive Secretary Salvador Medialdea introduced him as “the President of the Republic of the Philippines, Mayor Rodrigo Roa Duterte.” Interesting. 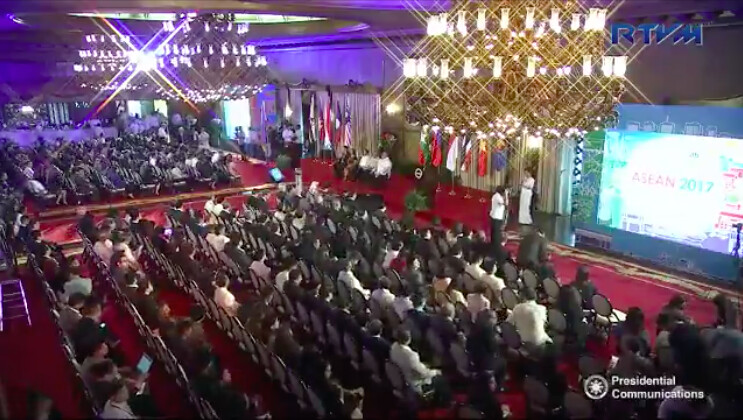 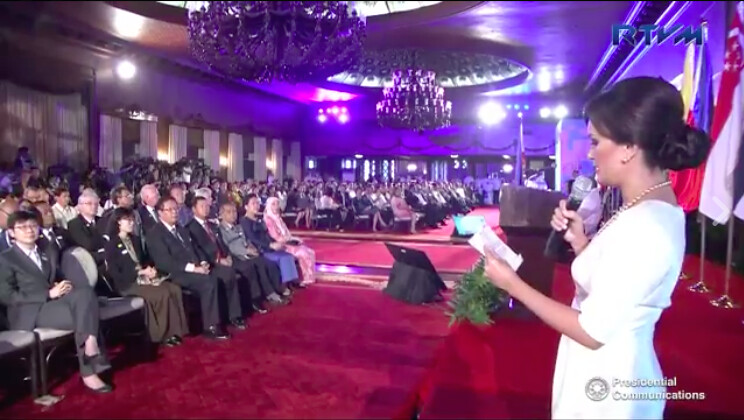 In my script, I had to announce that taking selfies with the President was strongly discouraged. 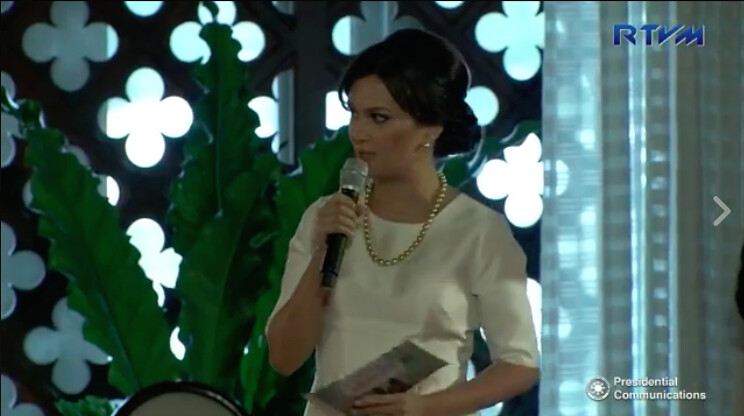 Loved the wooden quatrefoil panels by the window facing the Pasig River. Incidentally, the President arrived at Malacanang by boat from across the river. He doesn’t actually stay in the Palace building. 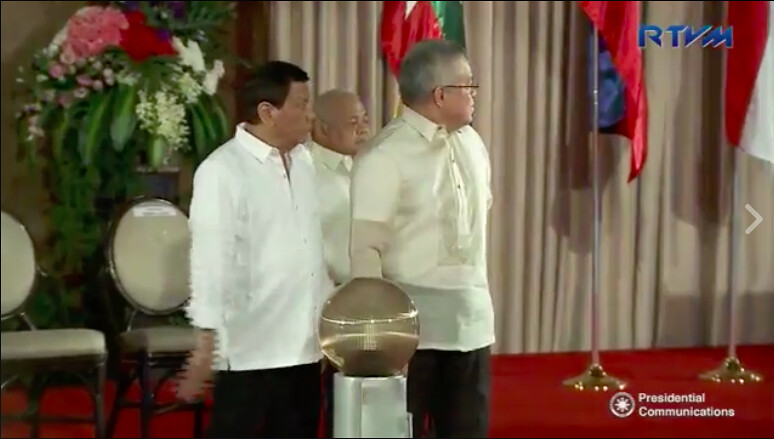 President Duterte and cabinet secretaries Medialdea and Lopez, listening to my cue. 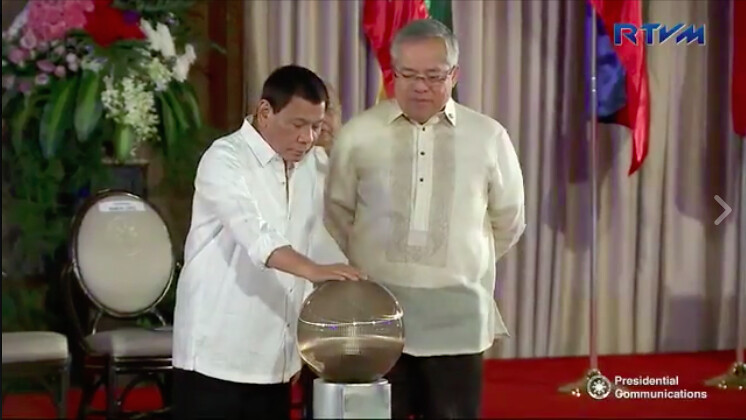 I announced the ceremonial launch of ASEAN while the President’s hand was on the sphere. 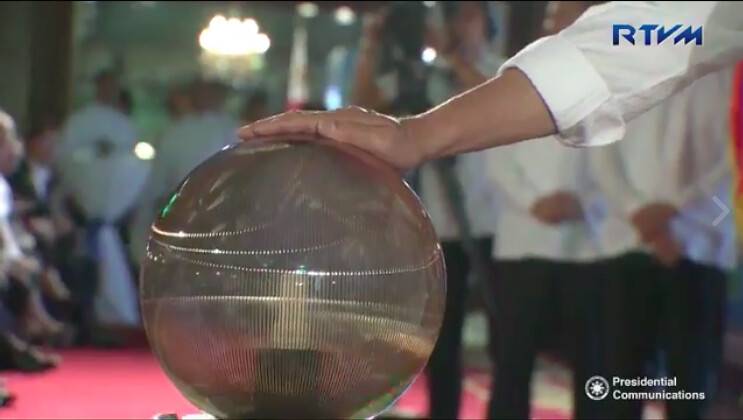 Ceremonial launch of ASEAN via this “hand scanning” sphere. 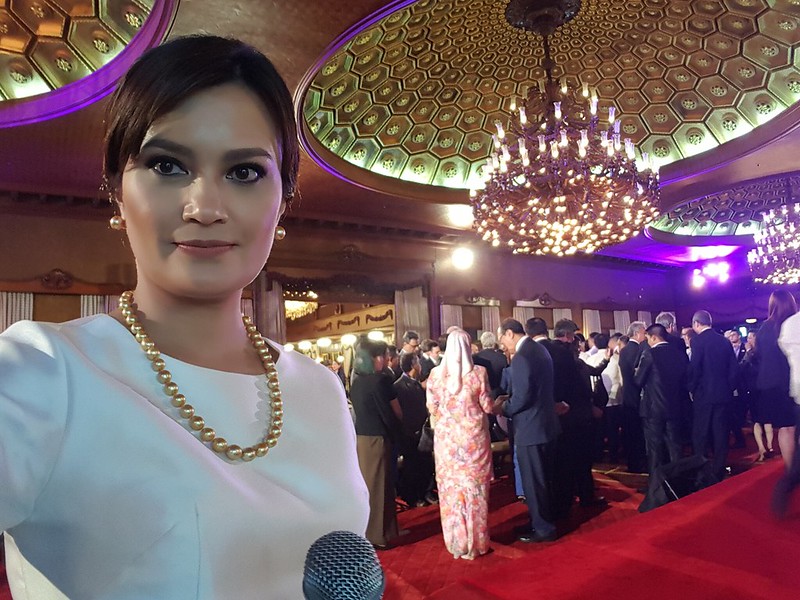 So because I follow protocol, I didn’t dare ask the President for a selfie. The guests though… made a beeline to him after the formalities. 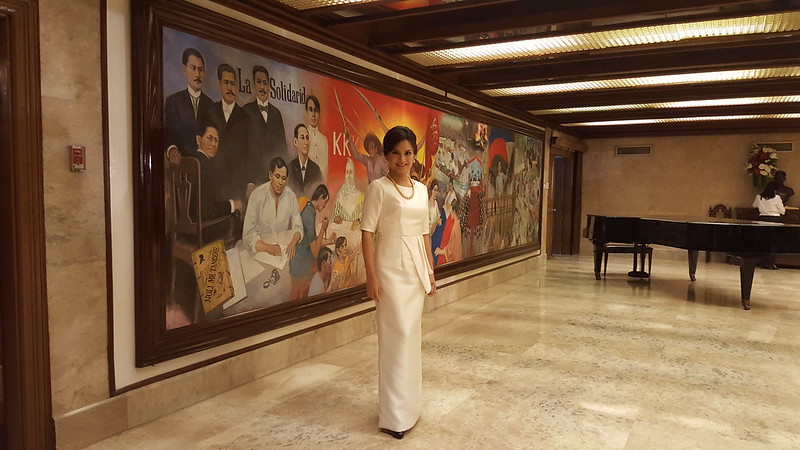 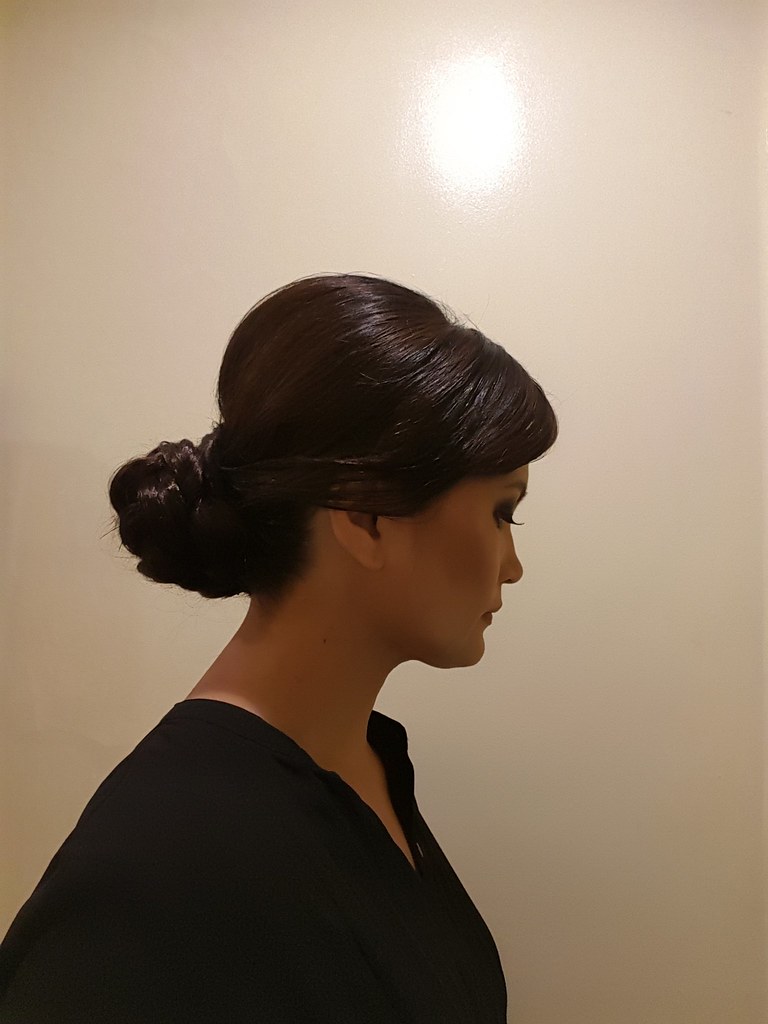 Back to my styling, I asked for big hair and a chignon. Big, worthy of Malacañang. So hairstylist Ronel Ros gave me this pouffy top and worked with my hair extensions, braided and bunched up like a chignon. My hair was just chin length then. I remembered I had a fake ponytail from my TV days. I actually had never used extensions on TV, but I owned it. It has finally come in handy. My makeup was by Ria Aquino.

Malacañang facts. I worked here every single day for over a year, as a tv news reporter covering Pres Ramos. It was also a special place for me as a child. We had easter egg hunts and special family events here when my dad was the pilot of Pres Marcos. Today Malacañang was extra special for me. I was host/emcee for ASEAN Business community with no less than Pres Duterte. Life is funny and surprising. Im totally not in charge. I have stopped making plans. Yet these things keep happening. Thank you Jesus for all the charming episodes in my little life. #gratefulheart #daphneproject

Posted by Presidential Communications (Government of the Philippines) on Monday, January 23, 2017.