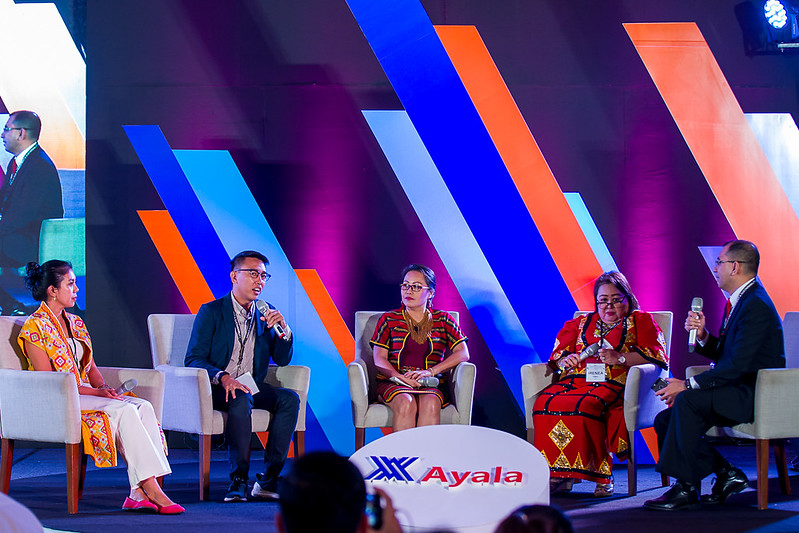 Around his time last year, October 2016, I attended the United Nations’ official kickoff for the UN Sustainable Development Goals (SDG) in the Philippines. As UNICEF’s Special Advocate for Children since 2010, I was invited to speak about the volunteer work I do through UNICEF Philippines. A couple of years before in 2015, I hosted the culminating event or graduation of the UN Millennium Development Goals.

Of the eight MDGs, Goals 4 and 5 (Reduce Child Mortality, and Improve Maternal Health) were the focus of my work as UNICEF Special Advocate. One of the ways to easiest and the best interventions to lower the number of infant deaths, was to promote exclusive breastfeeding for infants from the moment of birth up to six months, and complementary feeding up to two years old. I went around the country, to the most disadvantaged areas, to speak to health workers, mothers, community leaders, government agencies, and as a bonus I got to cuddle some cute infants. This advocacy brought me as far as Maguindanao during a time of conflict, Sarangani, Davao Oriental after Typhoon Pablo, Tacloban after Typhoon Yolanda/Haiyan, Rizal, Quezon, Laguna, and as near as the slums of Taguig. As the years went by, I also contributed by organizing some fundraising campaigns, the highest profile among the four events was the auction of chairs designed by Kenneth Cobonpue for APEC. We raised a total of 8.8 million pesos in two hours. In addition to advocating better maternal health programs, and encouraging breastfeeding, I am also now doing some work on child protection, mainly violence against children.

All these development jargon may sound like stuff I lifted from a technical brochure. But having been on the ground, having met many mothers, and knowing the plight of their families especially during environmental emergencies, the best way to communicate the importance of these lofty goals is to simply tell their stories. 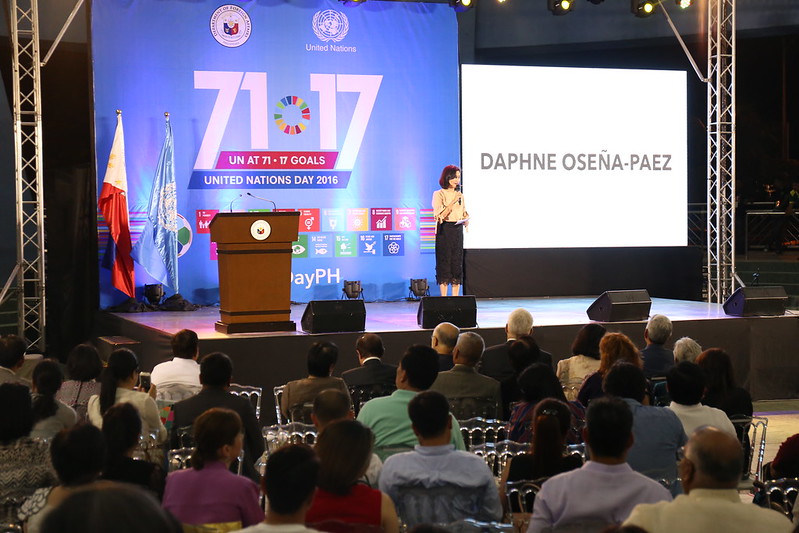 At the UN Day celebration in 2016, where I gave a brief talk. As one of UNICEF’s national ambassadors, I continue to support the UN Sustainable Development Goals. 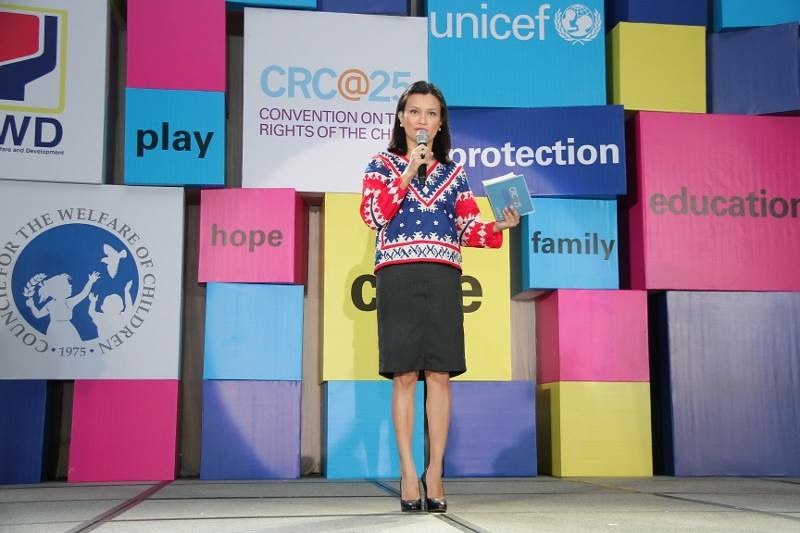 At the 25th Anniversary of the Convention on the Rights of Children and the culmination of the Millennium Development Goals in  2015. The UN SDGs were launched a year after the MDG culmination.

The new SDGs are 17 goals that aim to transform our world by 2030. You can read more about the global goals here. They are simplified with well-designed flat icons. I wish all local schools included the SDGs in their curriculum. The world’s critical needs are to end extreme poverty, fight inequality & injustice, and fix climate change. The Philippines is right smack in the middle of this global crisis. If the situation does not improve, it may be catastrophic for our land and our people.

This is the video that shows international celebrities and UN goodwill ambassadors’ support for the SDGs or Global Goals. 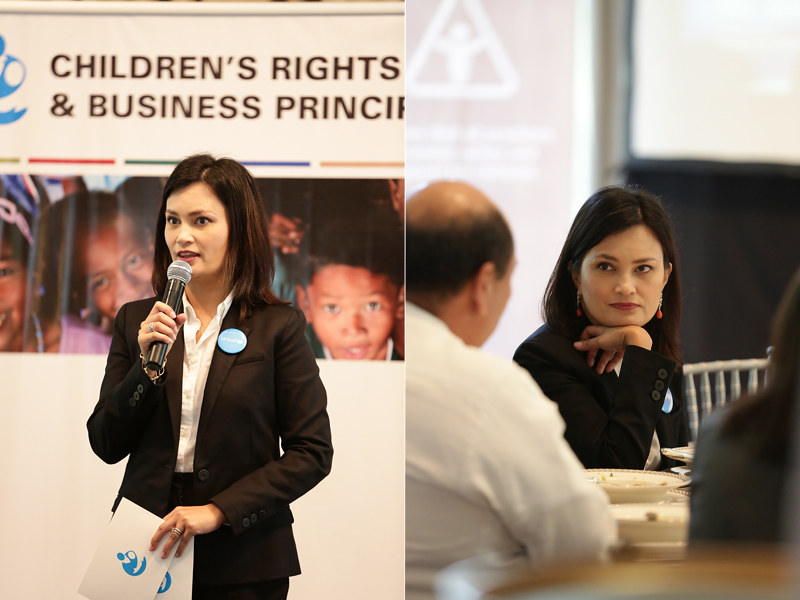 Once in a while, my worlds collide and create wonderful things. I’ve had the privilege to work with the Ayala Group a few times in the past – as host/emcee of their corporate events, and as a creative partner when they sponsored a season of my Urban Zone TV show. In July 2017, I hosted the launch of Children’s Rights and Business Principles with UNICEF, in partnership with the Makati Business Club. The CRBP is a set of principles to guide private sector companies on the full range of actions they can take in the workplace, marketplace and community to respect and support children’s rights. The CRBP was supported by the Ayala Group. In photo, I am having a conversation with my seatmate, JP Orbeta of Ayala Corp.

It was supported by the country’s prominent CEOs and partners like Jaime Augusto Zobel de Ayala, Chairman of the Ayala Group of Companies. Photo source.

The UN recognizes that in order to achieve these global goals, all sectors of society and all types of people must support and participate in it. One of the major groups, of course, is business and industry. The Ayala Group, not only has committed to respect and support children’s rights via the CRBP, but has also been committed to a strong sustainability philosophy since 2012. Ayala is integrating sustainable development goals into its core strategies and corporate culture. You can read more about Ayala’s commitment to sustainability here. 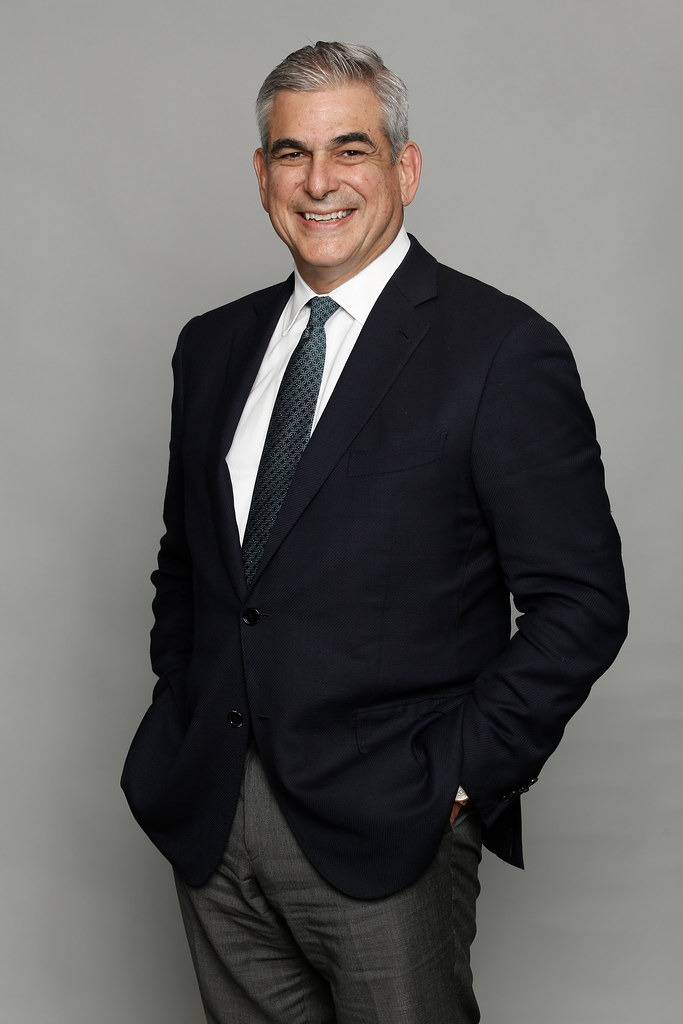 Ayala Corp. chair and chief executive officer Jaime Augusto Zobel de Ayala has been named one of the 10 “United Nations SDG Pioneers” for 2017. He was given recognition at the UN Global Compact Leaders Summit 2017 last Sept. 21 in New York.

Last October 6, 2016, Ayala hosted its 7th annual Sustainability Summit. I was invited to attend together with advocates of sustainability in government, non-profit organizations and social enterprise, as well as Ayala executives and managers. They shared experiences and insights on finding solutions to local and global social development challenges. The Summit coincided with the UN Global Compact’s recognition of Ayala Corporation President and CEO, Jaime Augusto Zobel de Ayala, as the UN SDG Pioneer for Sustainable Business Strategy and Operations. 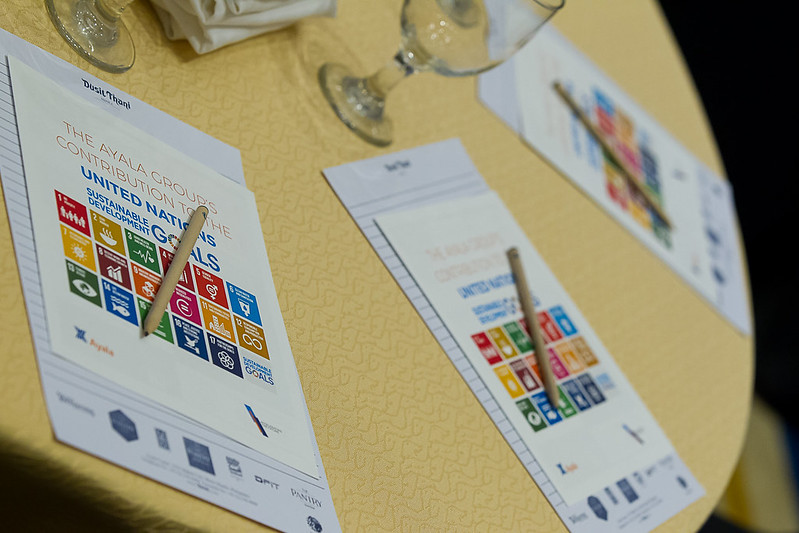 The Ayala Group presented their commitment to at least 10 principles of the UN Sustainable Development Goals.

Since, sustainability has been integrated into various Ayala businesses, it has included long-term sustainability targets in its many business interests. Some of these targets and goals are highlighted in this brochure: 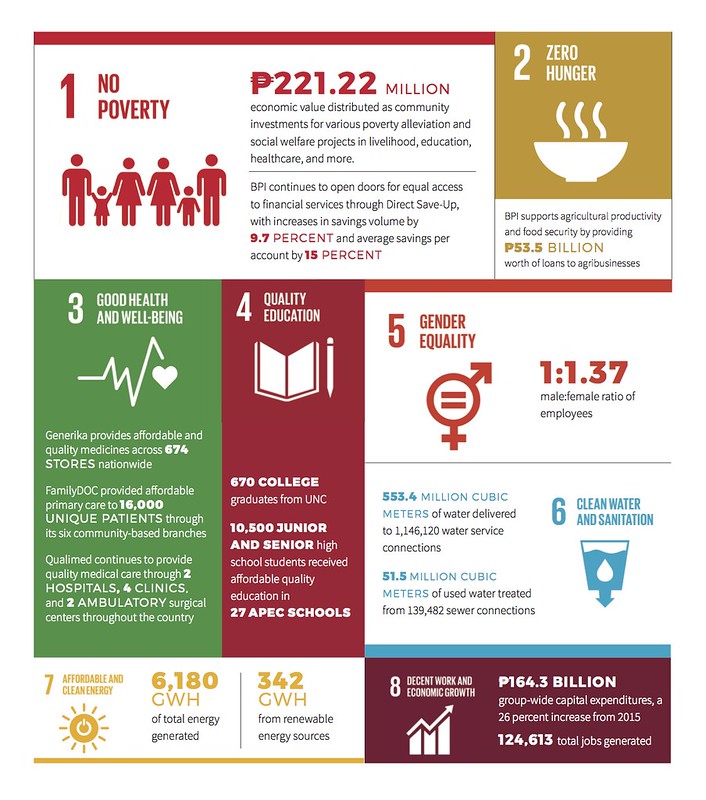 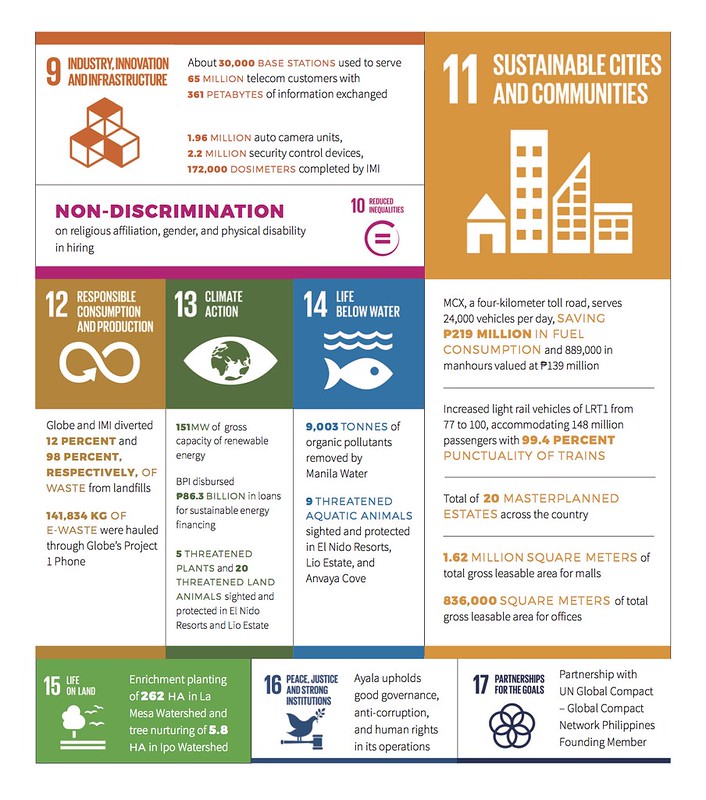 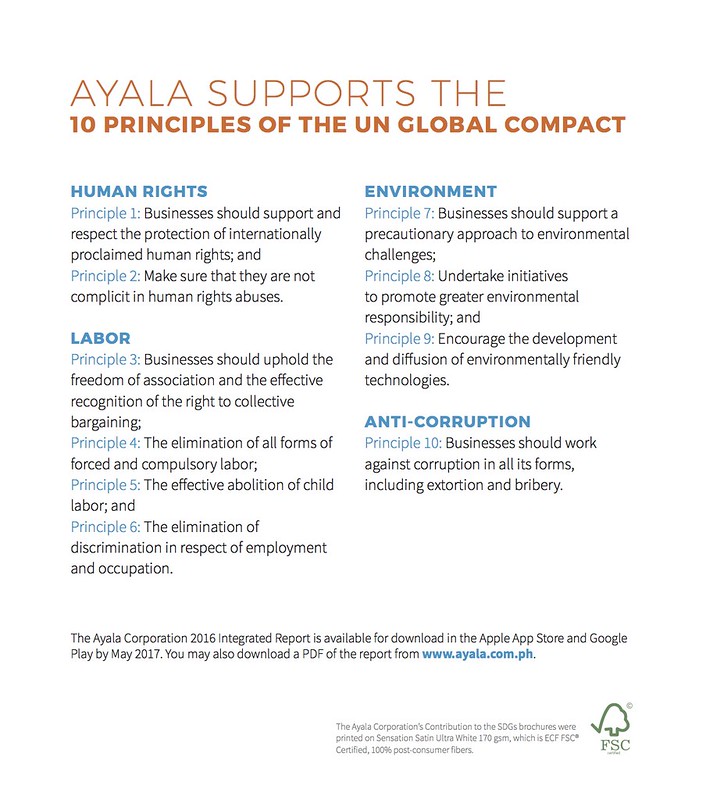 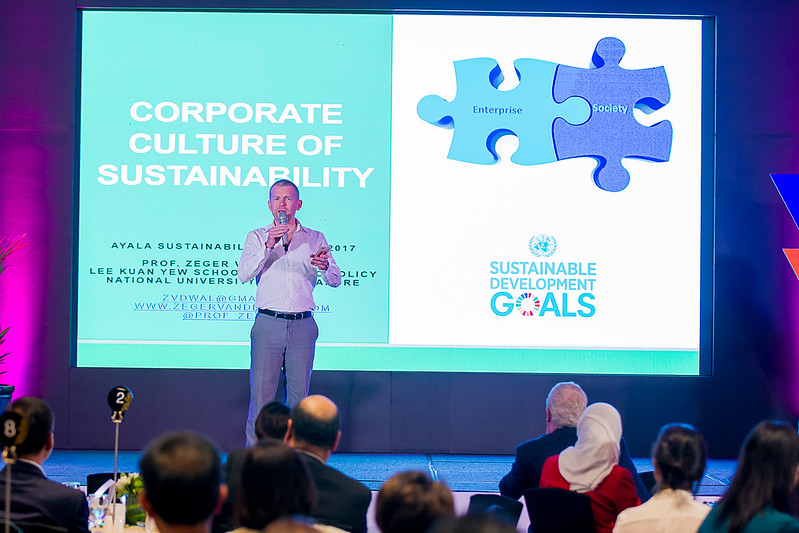 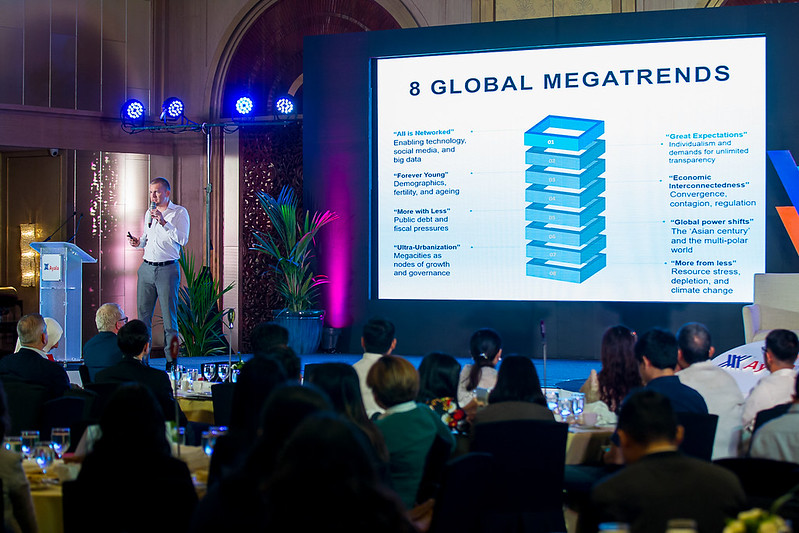 Prof Van Der Wal presented 8 global mega trends. According to Prof Van Der Wal, aside from the good effects and positive contribution to society, a sustainability culture brings about good business as well. Your company will get new, well-paying customers. There is a consciousness among consumers these days; many are willing to pay extra as long as they know the products are eco-friendly and were created using sustainable business practices. You will also create a culture of high-performing employees in the future. And you encourage a better reputation. 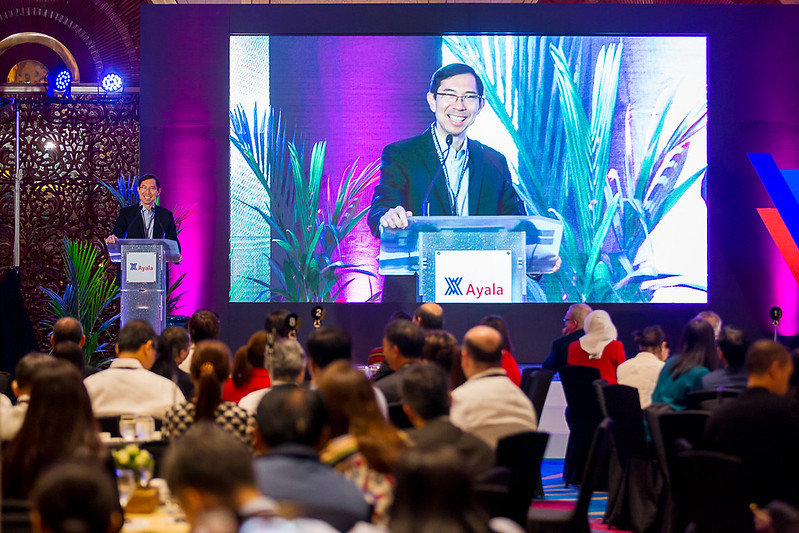 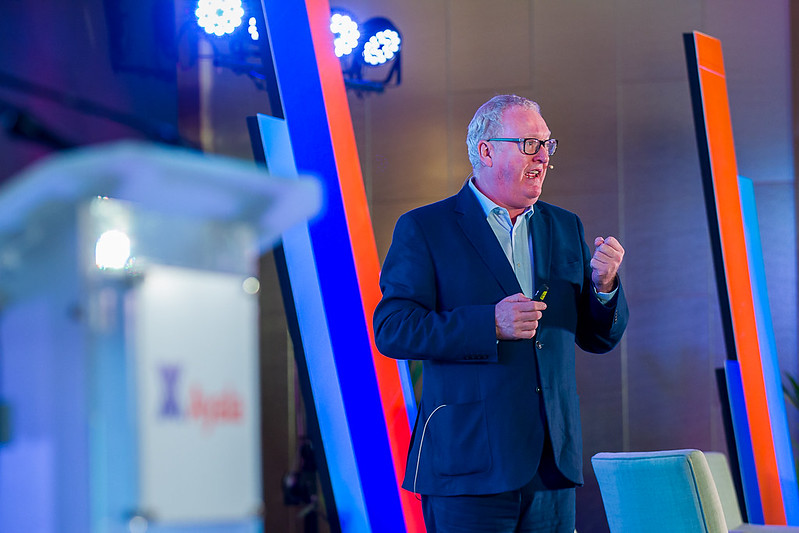 Richard Welford, president of CSR Asia, talked about creating a culture of sustainability by giving examples of global companies that have embedded sustainability in their corporate culture. He encouraged companies to create communities within where employees themselves believe in sustainability and become champions. 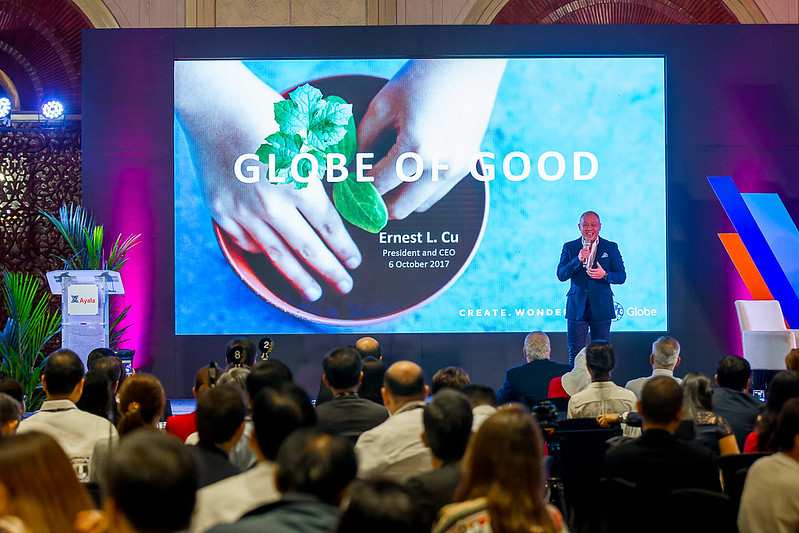 Ernest Cu, CEO of Globe Telecom, talked about how their culture has transformed to become a trusted and sustainable company. He said, with a sustainability culture imbibed throughout the organization, employees feel empowered and find meaning in their work, customers feel special and valued, and shareholders feel confident and rewarded. 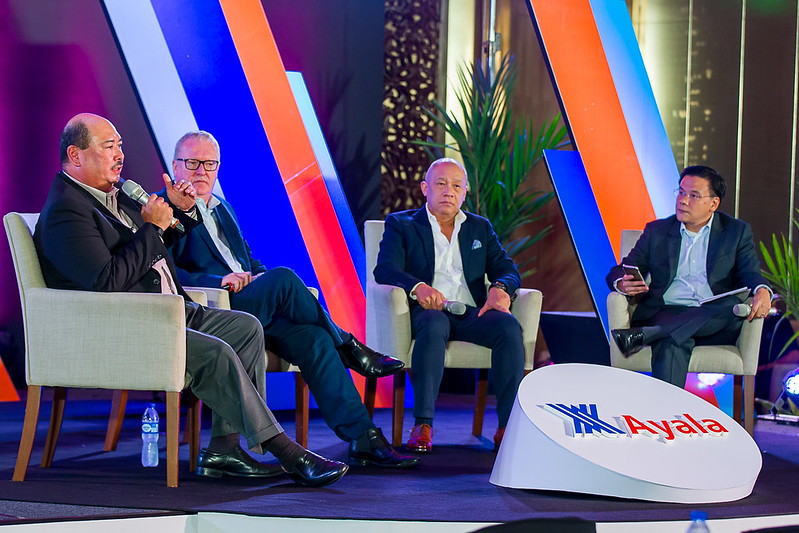 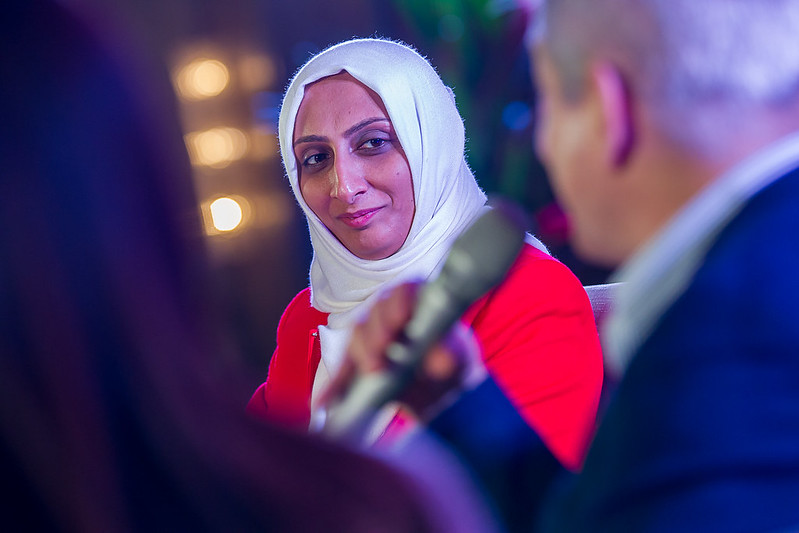 Zubaida Bai, Founder of ayzh, is an advocate of maternal health in India. She is also a champion of the UN SDG. 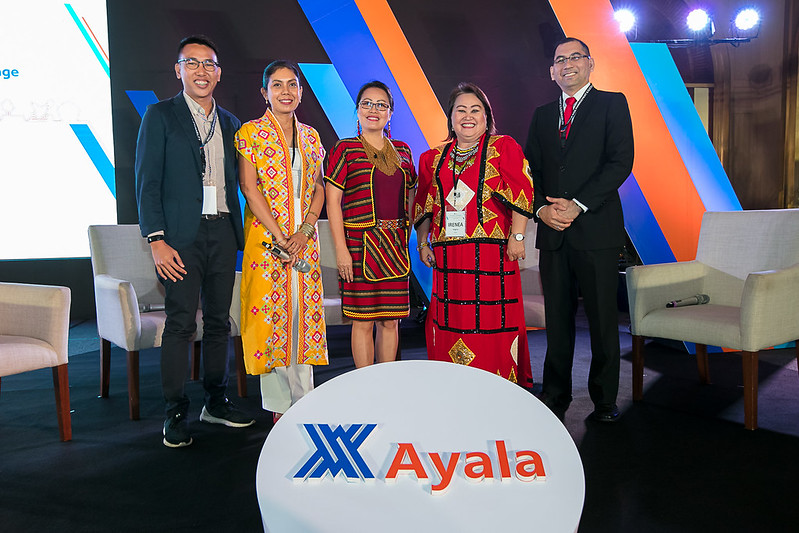 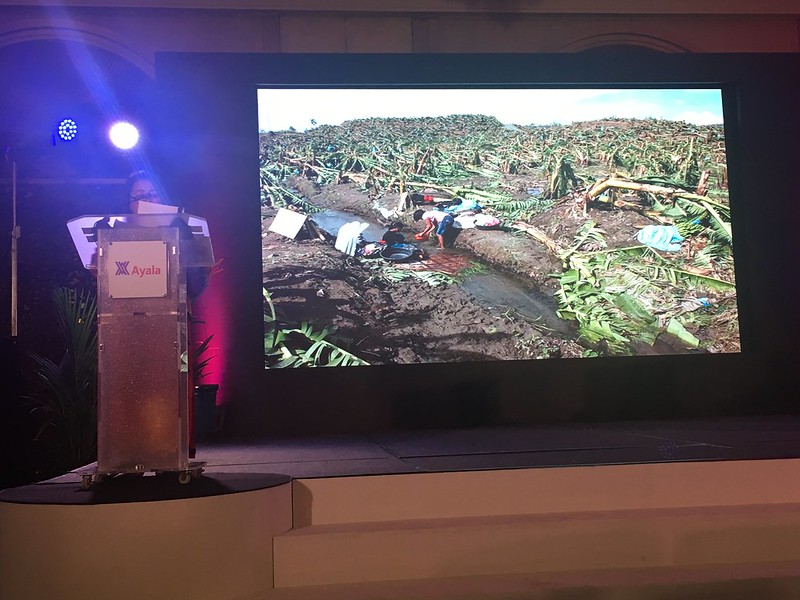 Irenea Hitgano of Hillsview Mangostea told her amazing story of how Typhoon Pablo left their mangosteen plantation devastated in 2012. While mourning the loss of their harvest, they realized that the fallen trees, with its leaves and barks, had very good medicinal properties. This was how Mangostea (mangosteen tea) was born. As the saying goes, when life throws you lemons, you make lemonade. 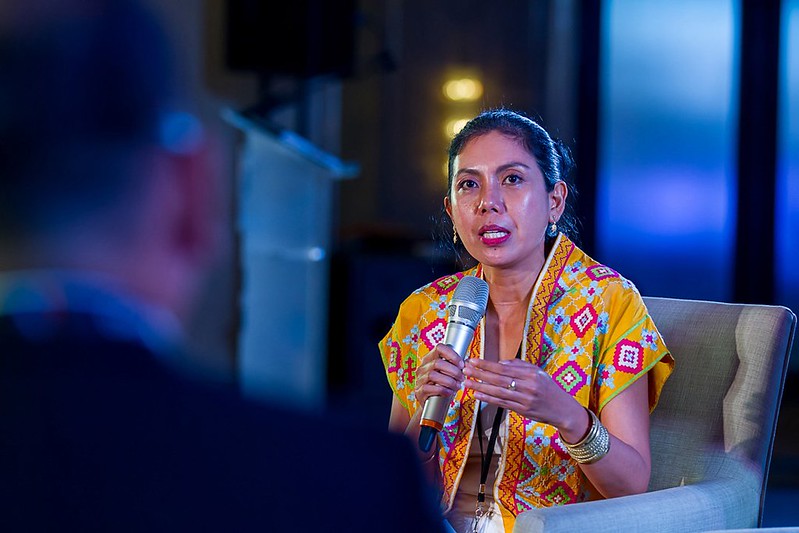 Len Cabili, founder of Filip+Inna, told her story about finding meaningful work after she had been diagnosed with Thyroid cancer. She found this in her roots in Mindanao. Filip+Inna works with different communities of weavers all over the Philippines. Her products are now sold in prestigious shops in the US and in Europe. 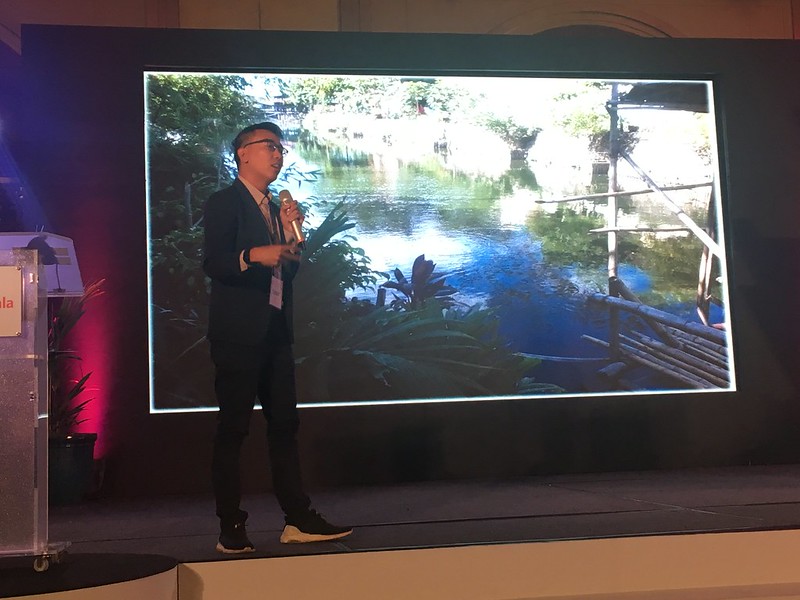 Tobit Cruz was a former Ayala employee. He wanted to make a difference in his community in Taytay, Rizal. With baby steps, he got involved with the river clean up and rehabilitation, until he found his way to be an elected local leader. Tobit is now councillor in Taytay Rizal. 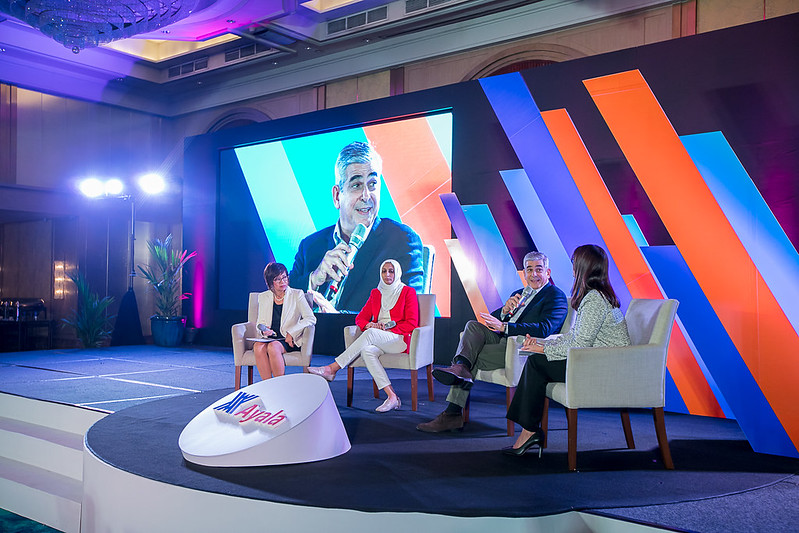 I love what Mr Zobel said, that institutions should want to contribute to achieve the UN Sustainable Development Goals as a personal responsibility not because they’re mandated. 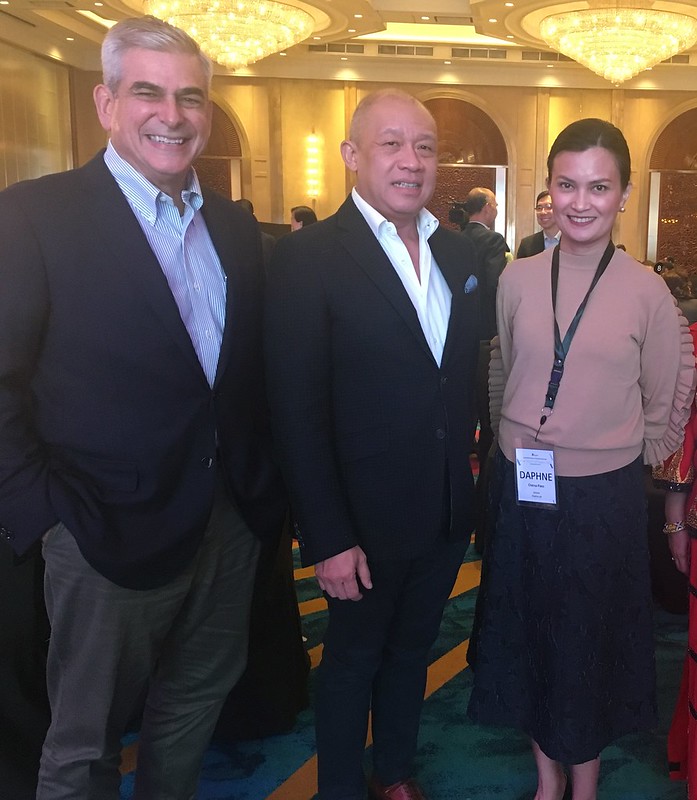 The occasion also coincided with the launch of the new Ayala website, with an updated section on sustainability. You may check out www.ayala.com.ph 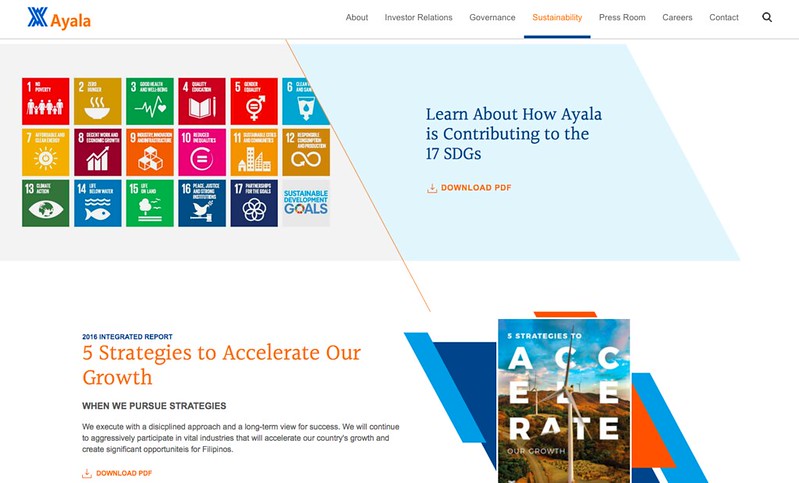 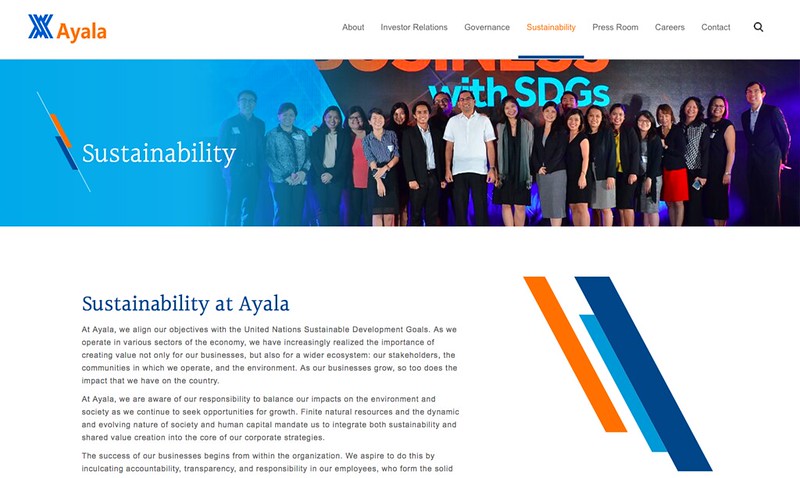 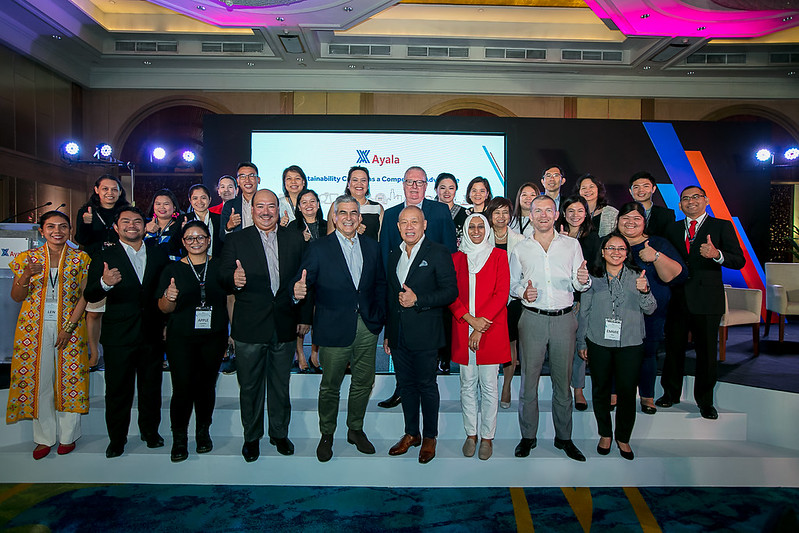 The participants of the 2017 Ayala Sustainability Summit.