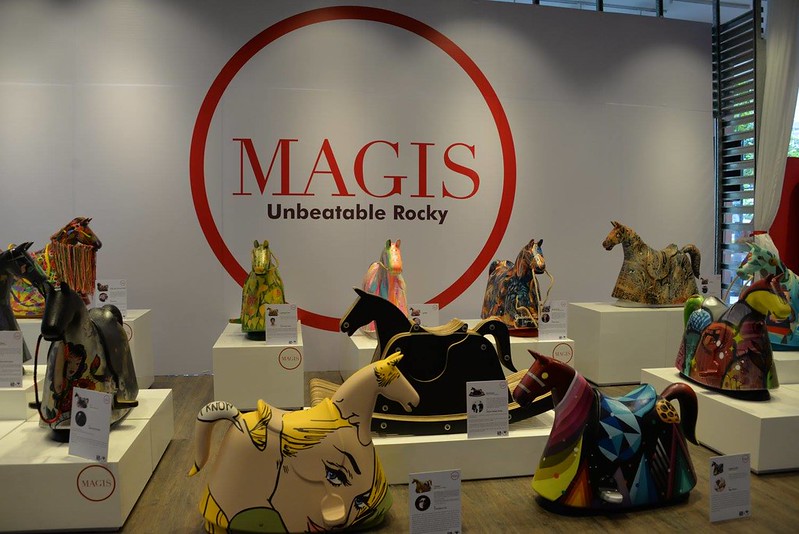 I’m still thinking about the amazing show I hosted at Studio Dimensione in BGC last week. To celebrate Magis’ 40th Anniversary, Dimensione and Secret Fresh Gallery collaborated with 14 Filipino artists to reinterpret the Magis Rocky, created by one of the most influential designers, Marc Newson.

Rocky is the second of Marc Newson’s designs for children, which is a modern take on a traditional object. Rocky is a pop version of medieval jousting horses complete with a parallelogram motion that mimics the movement of a traditional rocking horse. It is made from rotationally moulded polyethylene chosen for both its durability and recyclability.

Dimensione has established a modern and design-driven aesthetic in its merchandise and showrooms. I was very honoured to have had the DAPHNE® Furniture line carried there for a few seasons. It is my go-to for inspiration and home design needs. Lately Dimensione has been pushing the boundaries of art and design by having the most interesting art shows and design collaborations involving Magis. This is a great evolution for Magis and Dimensione, who have been exclusive partners in the Philippines since 1997.

These one-of-a-kind art pieces are for sale. The night of the launch, quite a few Rocky horses were bought on the spot. But you can still see the pieces. The Unbeatable Rocky is currently on display at the Studio Dimensione showroom at 28th Street cor. 7th Avenue in BGC, Taguig up to September 4, 2016. 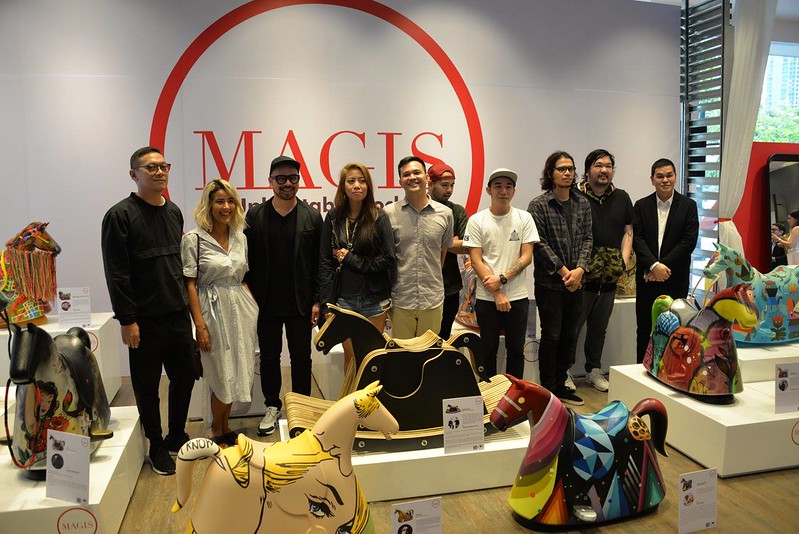 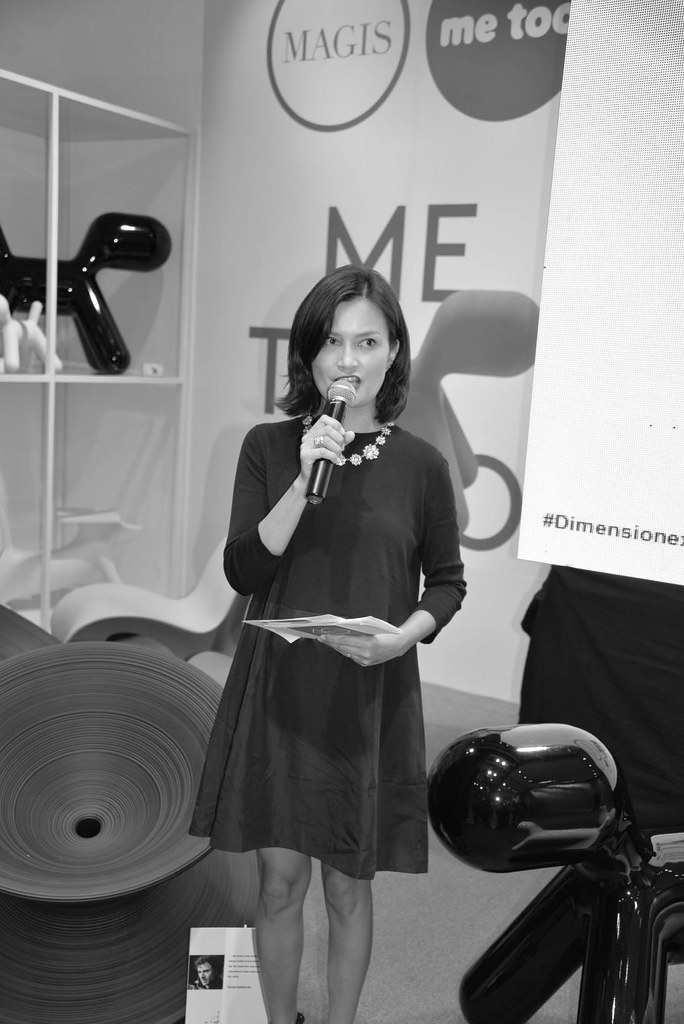 Me hosting. I wore a dress I bought in Cos Tokyo and necklace from Bauble Bar. Photo by Miguel Pastor. 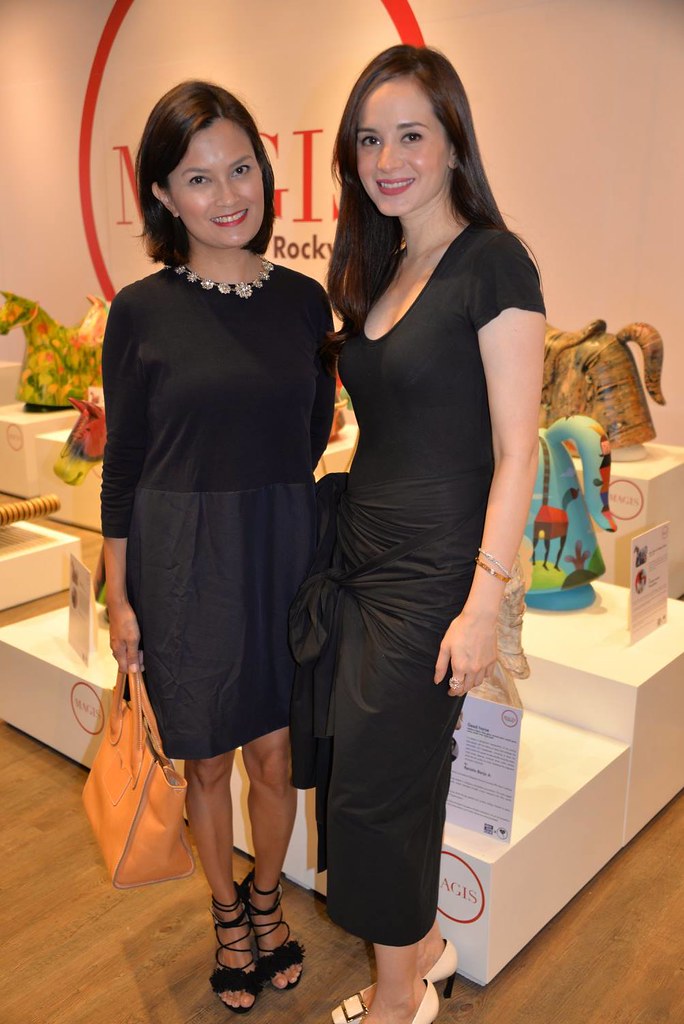 Always a pleasure being with Lucy Torres-Gomez. Photo by Miguel Pastor. 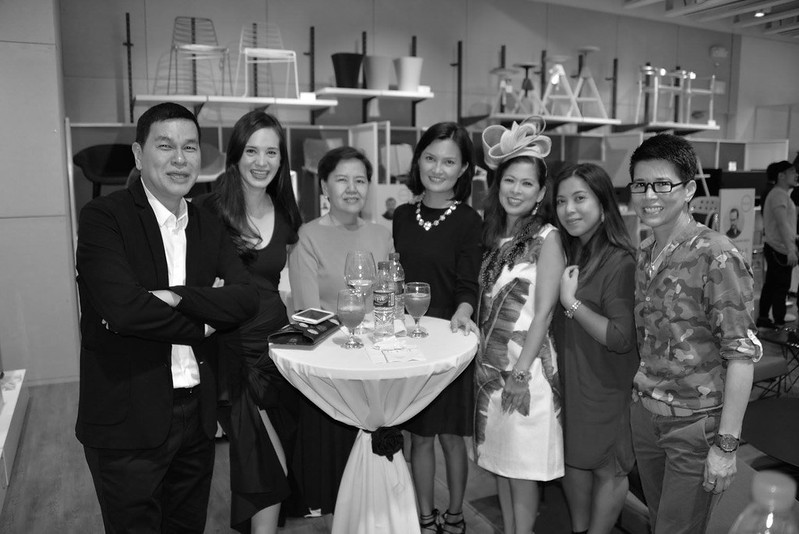 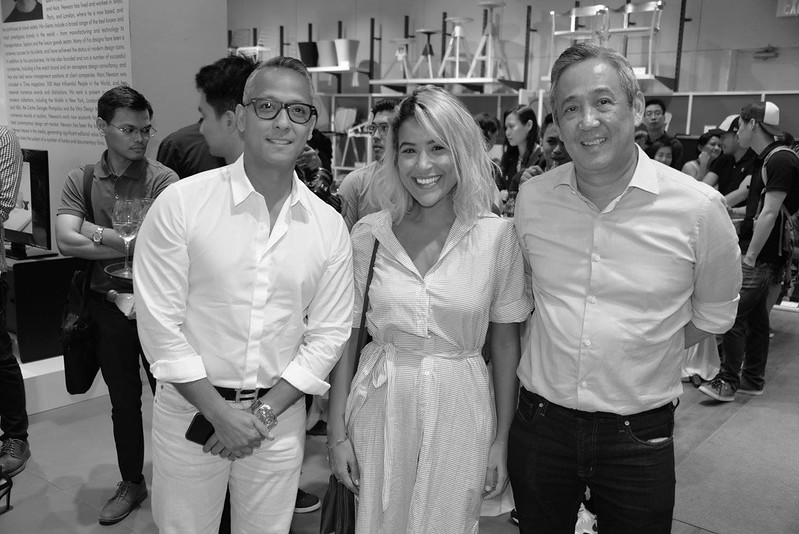 Gil Coscolluela and Joey Yupangco with the representative of Magis in the region. 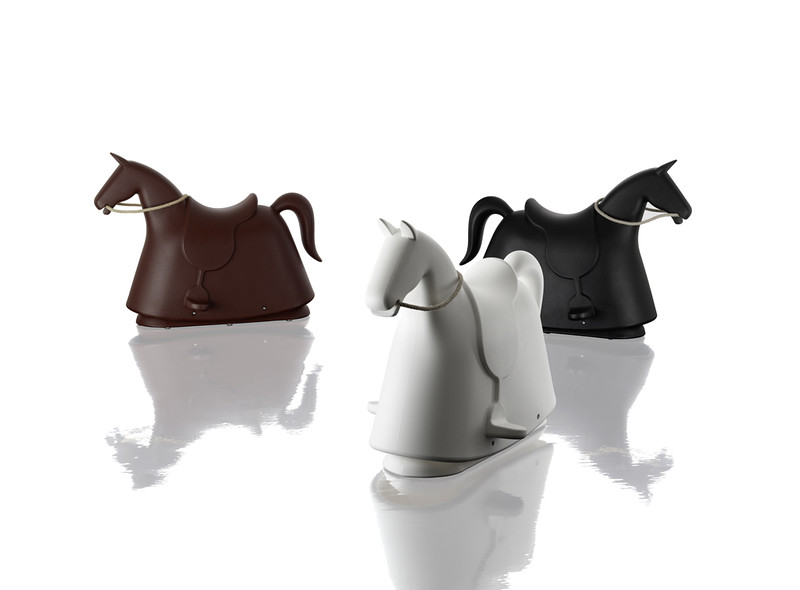 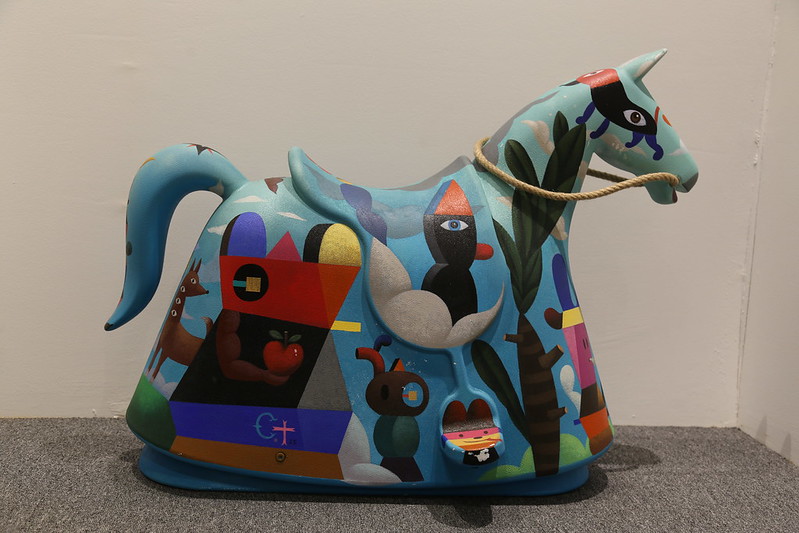 Christian Tamondong, “Fun Trip to Fantasy Farm”, Acrylic. “It was a sweet sunny day and Rocky went to visit Fantasy Farm. There he saw plenty of fancy plants, flowers and trees, birds, bugs and met new friends. He has so much fun and wanted to stay forever.” 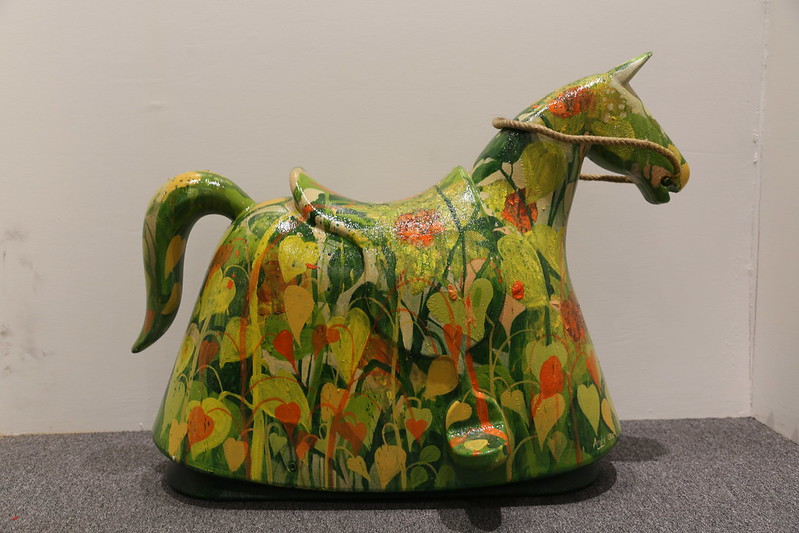 Mark Andy Garcia, “Sunflower Horse”, Oil paint. “It is inspired by Van Gogh’s Sunflower paintings, it felt really warm and the idea of as if looking outdoor is really nice. I love sunflowers.” 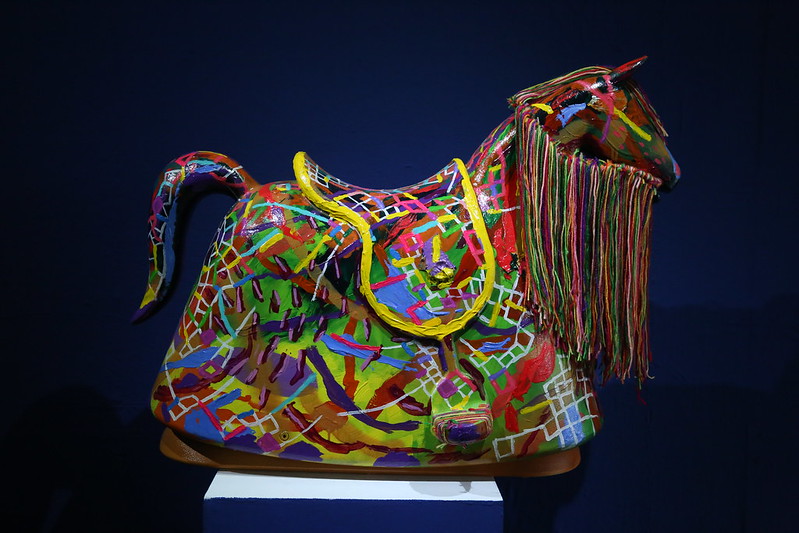 Jason Moss, “Pacita, your horse got loose”, Mixed media. “For this piece, the artist decided to play around with the idea of creating a narrative (situation) wherein the colour palette and patterns were influenced by the late artist Pacita Abad. The artist painted over the horse with acrylic paints and used assorted colours of yarn to embellish the rope fastened to its mouth.” 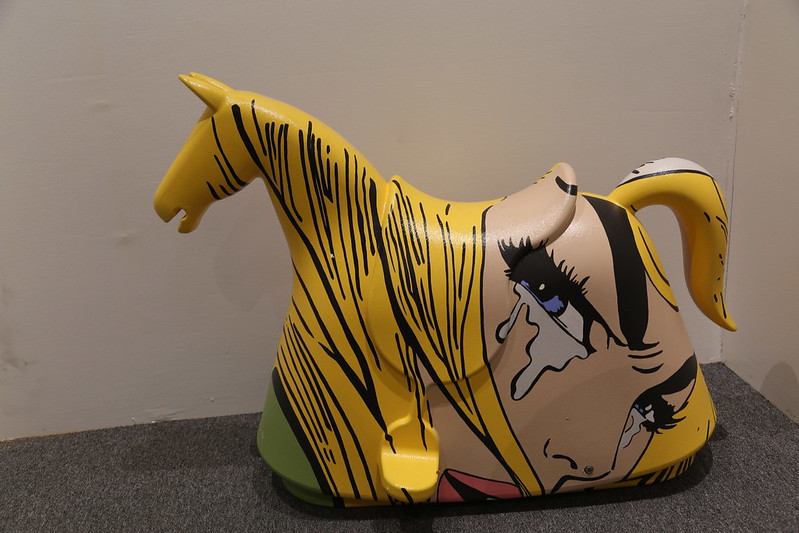 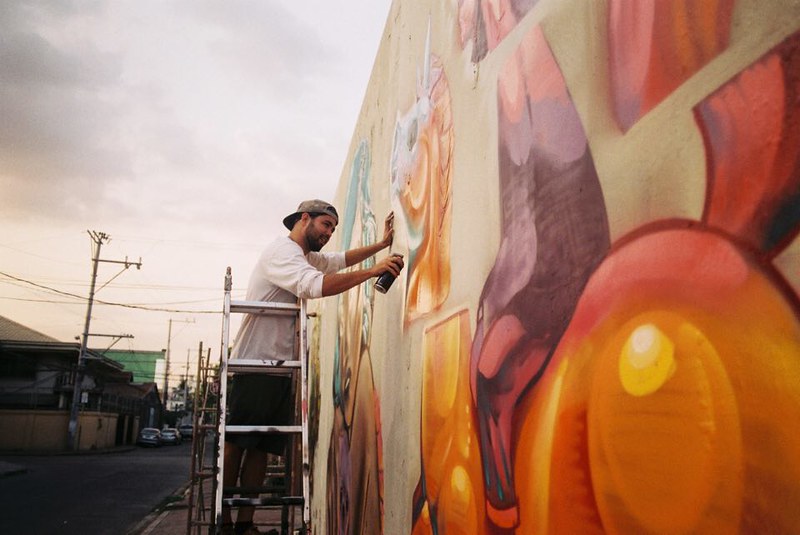 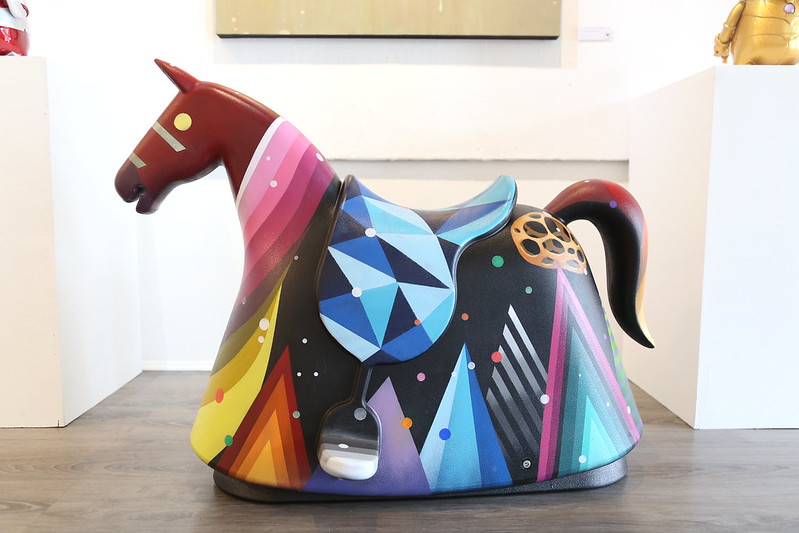 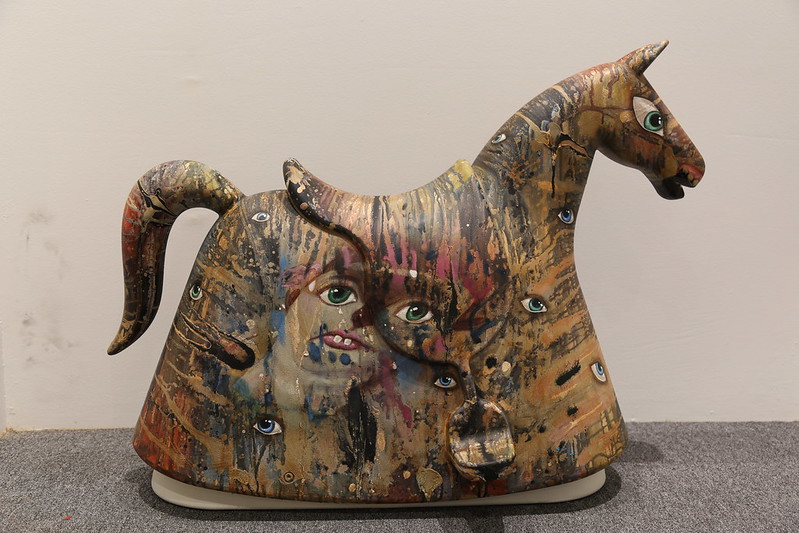 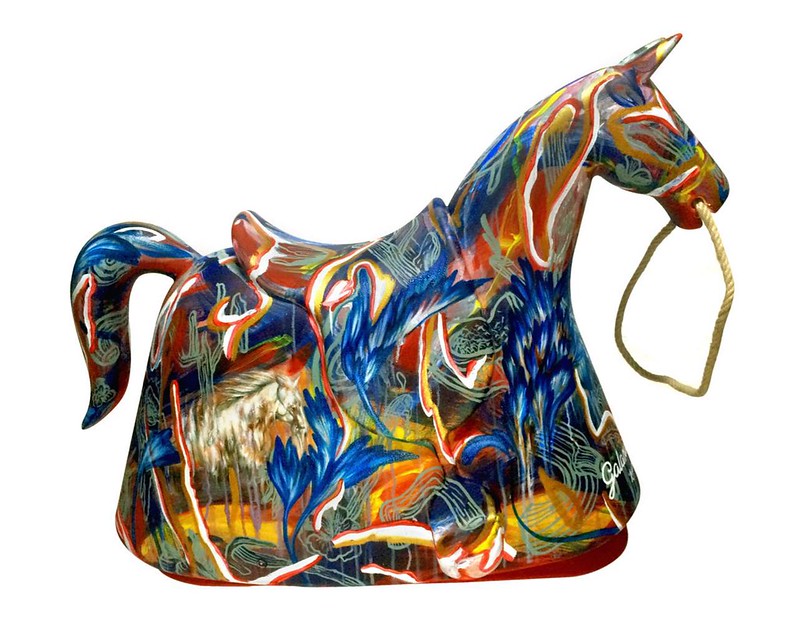 Galaxie Maria, “Kandinsky Lily”, Mixed media (Acrylic paint x Oil paint). “Throughout his lifetime, the artist, Wassily Kandinsky has painted horses. The thought process in its creation revolved within the contemplative question, “What it would be like if a horse dreamt Kandinsky?”. This is a tributary piece on the ingenuous indulgence of his work; as the noble creature daydreams, amidst fragments of an imbued, cascading landscape of horses.” 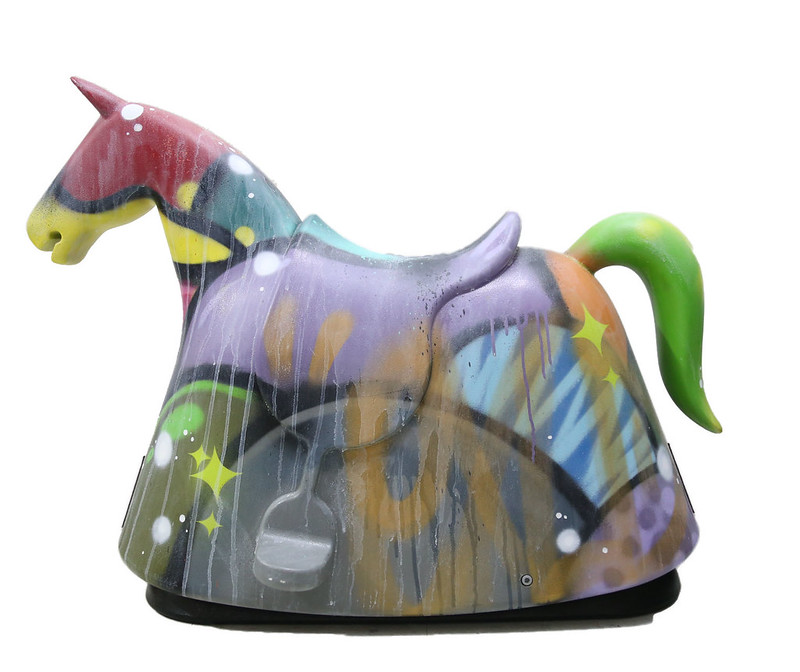 JJ Exld Zamoranos, “Gallopolis”, Acrylic and Spray paint. “The idea is to connect the urban aesthetics, especially graffiti and street art process and applications to an unconventional type of platform, particularly the Magis rocking horse. Gallopolis, (meaning Gallop + Metropolis) is an implication of an inevitable link between two different contemporary art movement. Intimately connecting the fine art and high brow ethics to the beautiful decay of urban and low brow art.” 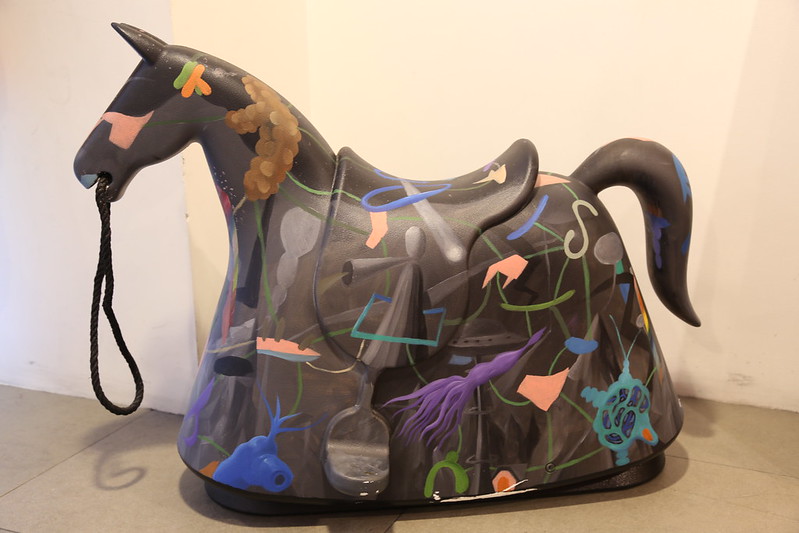 Gene Paul Martin, “Others”, Oil paint. “It is an attempt to coat an object to alter its natural function and bringing it back to be something undefined. It is created by debris of junk ideas. Constructed by overlapping of contemplations and small talks materialized in odd shapes and shades.” 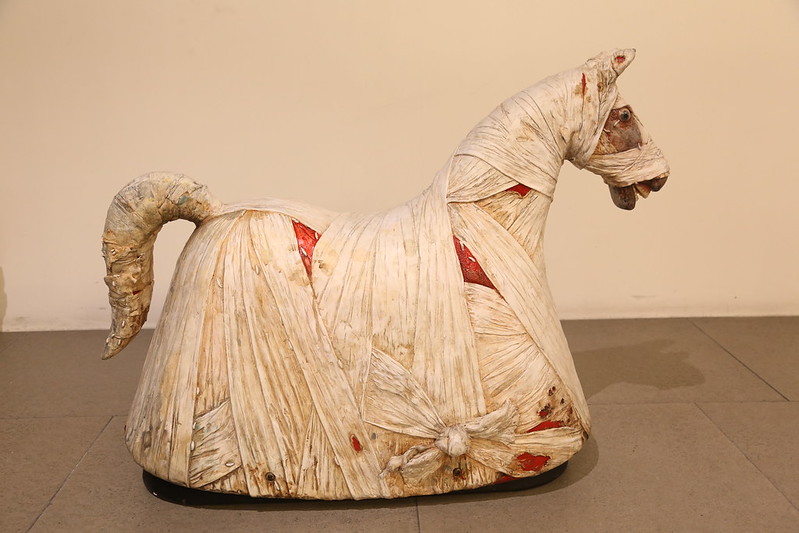 Renato Barja, “Dead Horse”, Resin, Fiber glass, enamel paint, acrylic paint, epoxy, plastic wire, false teeth. “It is Barja’s 3 dimensional representation of the working class people, with the feeling of being tired endlessly, the melancholia and hopelessness. According to Barja this piece is about the people he sees everyday along the streets, lonely buses, jeepneys, hardware stores, public markets, technically the surface of society. Expressing the resignation of forsaken individuals.” 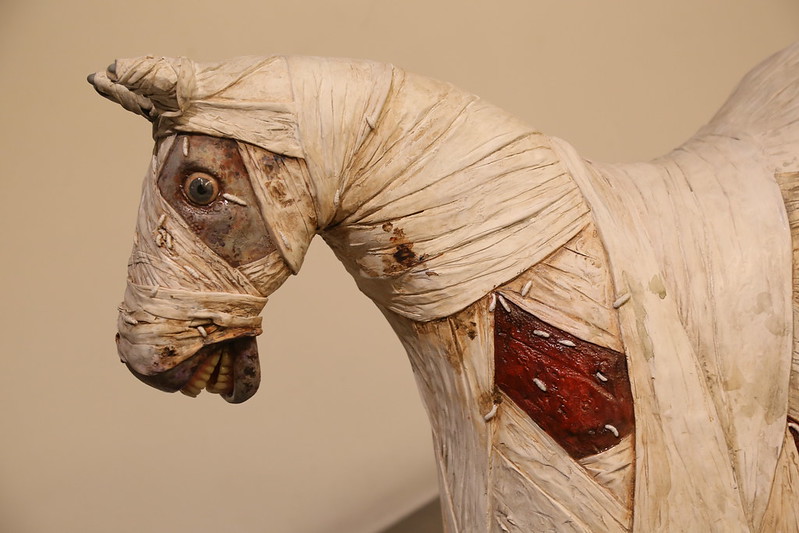 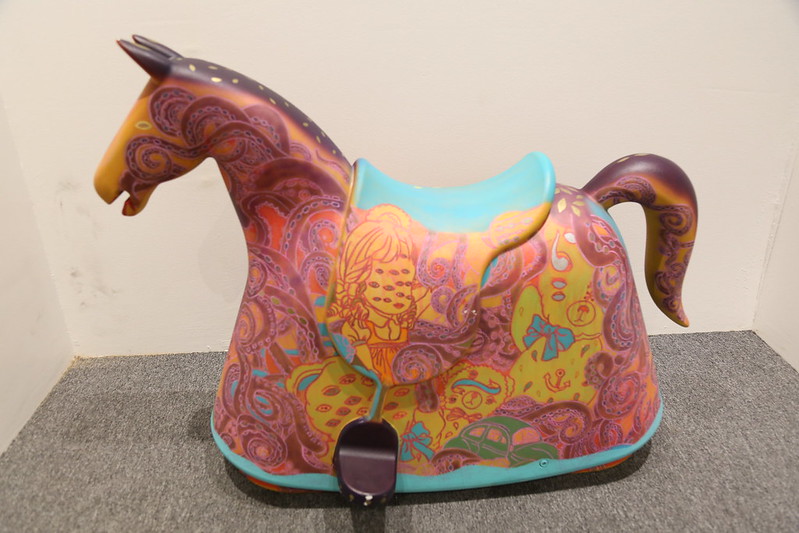 Iya Consorio, “El Kimbra”, Acrylic paint. “The concept of the horse is about a ship that sunk and eaten by an Octopus monster.” 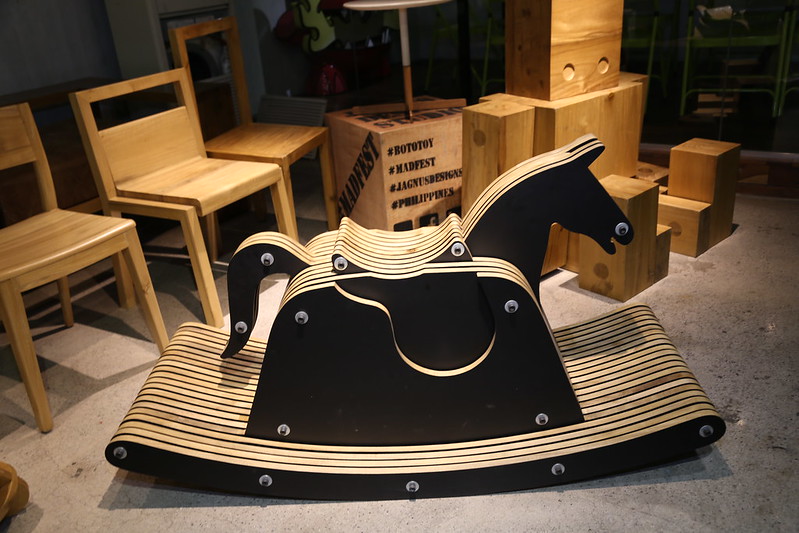 Jagnus Design Studios, Darkhorse, Gmelina wood boards. “Darkhorse is an analog interpretation of Marc Newson’s Rocky in wood. Derived from Rocky’s silhouette, its planar form is a series of varying wooden boards finished in black to accentuate the sections linked together by steel nuts & bolts. Motion is provided by the addition of a conventional rocker reminiscent of children’s old school rocking horse. The fast-growing Gmelina (white teak) wood is chosen for its durability, lightness and sustainability.” 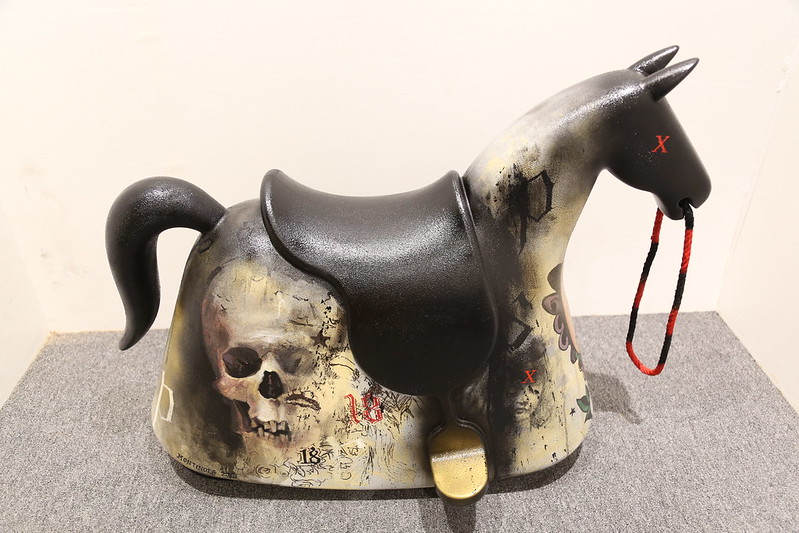 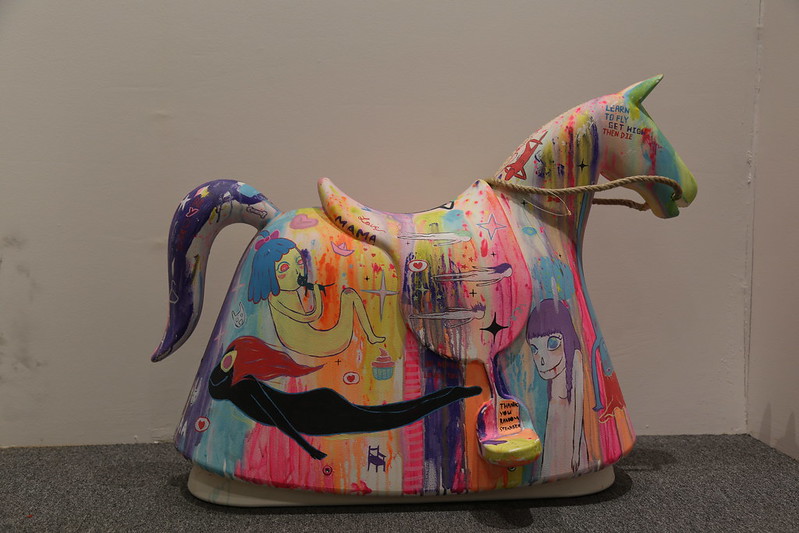 These one-of-a-kind art pieces are for sale. The Unbeatable Rocky is currently on display at the Studio Dimensione showroom at 28th Street cor. 7th Avenue in BGC, Taguig up to September 4, 2016.