Last week I took a break from my life — work deadlines, mommy duties, activities in my daughters’ school — and went to Naga with UNICEF. Once in a while I leave everything behind, focus my attention on UNICEF programs. I get to tell stories from the field and try to make a difference for many Filipino children and mothers. We kicked off Breastfeeding Month with a trip to Naga City where UNICEF showed me the different private and public initiatives to promote breastfeeding support in the workplace. I also got to participate in a forum discussion at the House of Representatives. There would have been a Senate appearance as well, however it overlapped with my Naga trip.

Here is a short video from our trip, showing how important it is to support breastfeeding moms, especially in the workplace.

With UNICEF, I participate in activities that promote maternal health, breastfeeding and nutrition (See my previous UNICEF activities here.) I give my time and lend my voice to UNICEF because I feel like we are in this awful cycle of poor nutrition and poverty and it will get worse if we don’t do anything. We will be a nation of adults raised on instant noodles, supposedly-“fortified” powdered stuff, fake flavouring, with newborns fed formula milk. I’m not talking about a chi-chi organic lifestyle change – though I love organic weekend markets. I’m talking about going to the poorest and farthest provinces, and seeing families feed their kids these artificial things. I’ve seen children getting sick with diarrhoea because of contaminated water and dirty bottles because a poor mother would rather buy formula milk than feed her baby directly from her breast. In poor areas, diarrhoea can lead to death. My old driver used to borrow extra money so they could buy formula milk for their newborn, while I made heaven and earth move just so I could find a place to express my milk and bring it home to my baby. It just didn’t make sense.

I found an old post in 2008 where I quickly mentioned that I had a breast infection (mastitis). This was before I had met UNICEF and before they asked me to be their advocate. It shows how little I knew. I thought it was ok for hospitals to give glucose water in a cup. It’s not. And mommies, if you think you have mastitis, please see a doctor as soon as possible. Ask for an ultrasound if you think you have an infection.

Here are my tips for happy breastfeeding (from my 2008 post):

1. Get a pediatrician who advocates and believes in feeding from the breast. She will support you.
2. Ask for a lactation consultant at the hospital. You will need “instructions” in the beginning.
3. Tell the nursery NOT to give your baby formula milk or a bottle. If needed, they can CUP FEED your baby with glucose water. The baby will not starve (this applies to non-preemies). Edit: There is no need to give your baby glucose water. It is recommended that babies room in with their mothers in order to make breastfeeding easier from the moment of birth.
4. Read up on how to store milk or join breastfeeding clubs or forums online
5. Get a breast massage. It helps wonders. Your milk will flow like Niagara Falls.
6. Don’t get pressured into buying fancy electric breast pumps. You won’t know if you really need it until you are already breastfeeding. Wait a few weeks.

Since 2011, UNICEF has been supporting the Department of Health, local government units, and labor sector partners in the formal and informal economies to implement the Expanded Breastfeeding Promotion Act of 2009 (RA 10028) and The Milk Code or Executive Order 51. These laws mandate that workplaces should be given an environment where breastfeeding moms are supported and empowered. This means, they should be given a space and be allowed paid breaks in order to breastfeed or express milk. This is good, considering we have one of the shortest maternity leaves in the region — only 2 months. Though a lot of moms may want to continue breastfeeding their babies even when they return to work, some of them just give up. Only 34% of children aged 0-6 monhts are exclusively breastfed in the Philippines.

Women need a supportive environment so they would continue to breastfeed. This isn’t just a beautiful mommy-baby bond. If all companies and establishments provided a supportive and comfortable environment for breastfeeding, babies will be healthier, moms will have less guilt about going back to work and they will be more productive. We will raise children who will more likely be able to finish their education and get better jobs. In the Philippines, only 34% of women exclusively breastfeed their babies up to 6 months. And the number drops significantly after the 6th month. 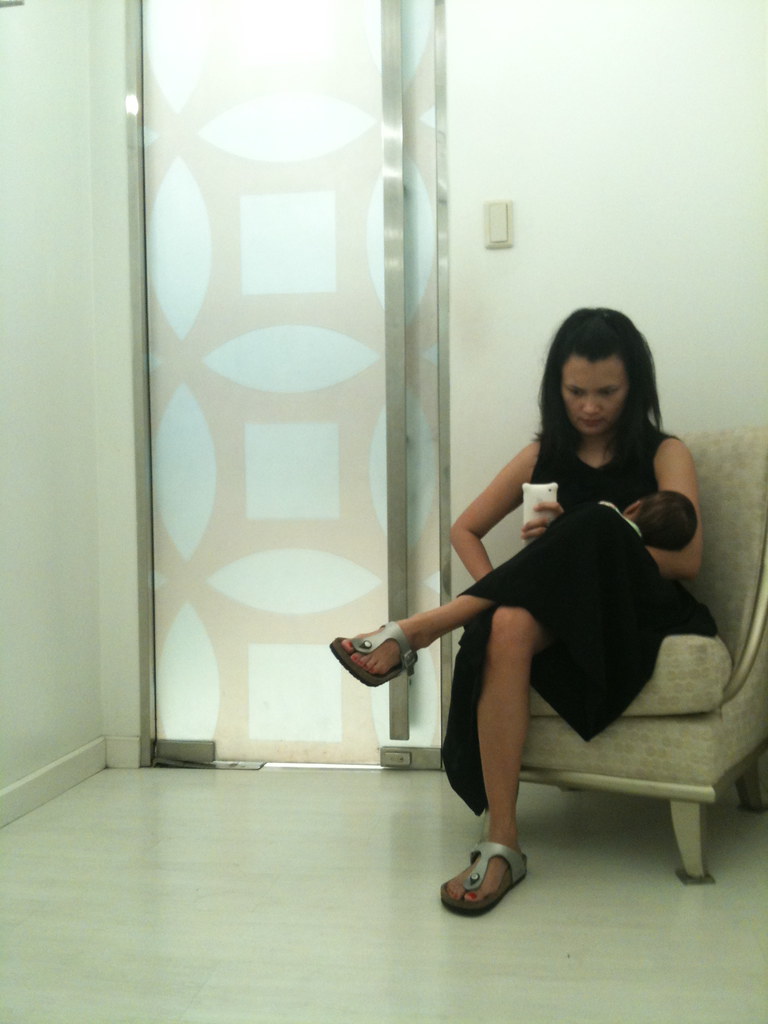 When I was still breastfeeding my babies, there were no mommy-baby lounges in malls. So I would rely on fitting rooms in stores. K&Company is like family to me. I would spend a few minutes breastfeeding the babies in their beautiful fitting room. Sometimes, I would find myself overflowing and would just settle for a bathroom somewhere and pump. Now, most malls have lactation-friendly lounges, as they should. 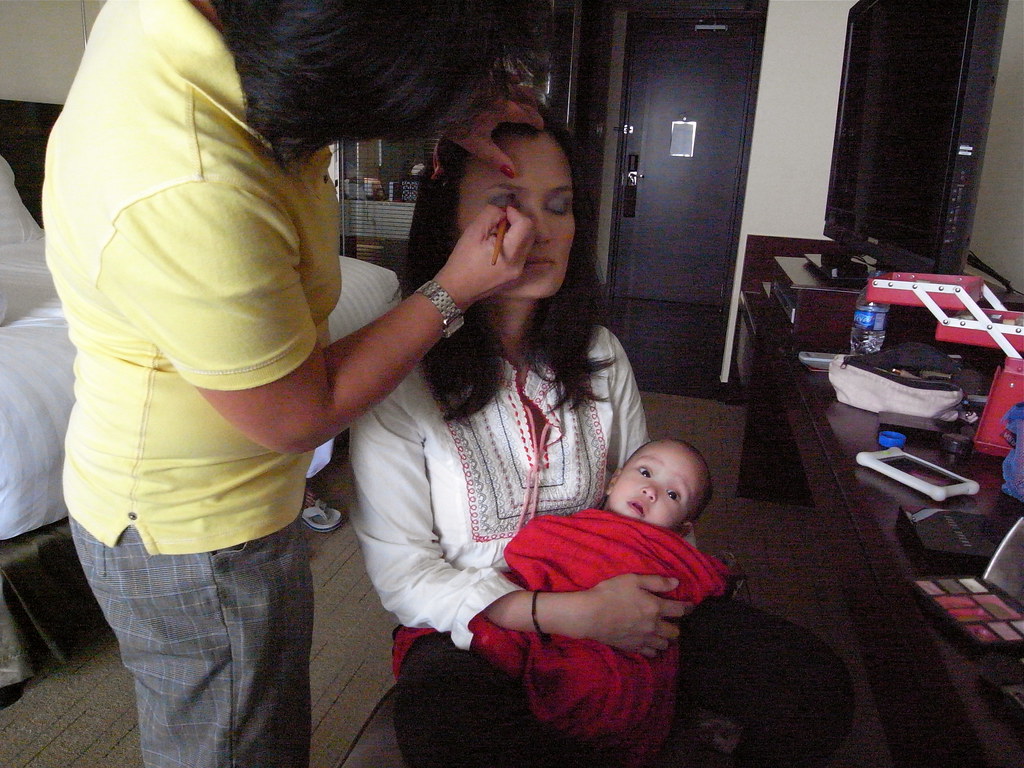 And since we have no family here in the Philippines (only one, my BIL who is a priest), I have no back-up or support system except for househelp and my husband. I brought my babies to work with me. Lucky for me, my working conditions then were very comfortable. This was me getting ready for a shoot at Sofitel. And that’s my little Stelly belly wrapped in one of my scarves.

I breastfed all three of my babies. I didn’t have a structured work environment, i.e. no office, so this meant I was able to express milk (manual pump) anytime and anywhere. I carried a cooler packed with ice gels. During this time, malls didn’t have lactation rooms yet. I had to find ways and places where I could pump. Unfortunately most the pumping happened in bathroom cubicles. I also did not have maternity leaves. When I gave birth to Lily, I shot a TV commercial for a beauty product 7 days after giving birth. And I had to shoot Urban Zone 10 days after giving birth. I remember that day – it was an interview with Cheese Escudero and I couldn’t wait to get home. During Stella’s time, I had about three weeks worth of video packages done in advance so I was able to stay home. But I had to shoot a beauty product for the body (body soap) five weeks after giving birth. That’s when I discovered Pilates. So you see, as moms, whether you go to the office or not… you just try to make it all work.

Here is a video of a lactating working mom. Let me know if you can relate.

I have gone to many parts of the Philippines as an advocate of UNICEF and in my previous life as a journalist and balikbayan traveler. I have seen babies with severe acute malnutrition in Maguindanao amidst conflict, families displaced by Typhoon Pablo in Davao Oriental, communities trying to get back on their feet in Tacloban after Typhoon Haiyan. Breastfeeding has the single largest potential impact on child mortality of any preventive intervention (i.e. vaccines, medicines). This means, if a newborn baby is given mother’s breastmilk in the first hour of life and only breastmilk until he/she is 6 months old, this baby will have a greater chance at survival and will be less likely to get sick. Now we have more evidence that exclusive breastfeeding from birth to 6 months and complementary feeding up to two years old, can help prevent stunting in children. Stunted children are more prone to death and disease, have lower educational attainment, and reduced productivity as adults. The Philippines is one of the ten countries in the world with the most number of stunted children — 1 in every 3 Filipino children under 5 years of age is stunted. That’s an estimated 3.4 million children. These may all seem like just numbers, but I’ve seen what it’s like in real life. 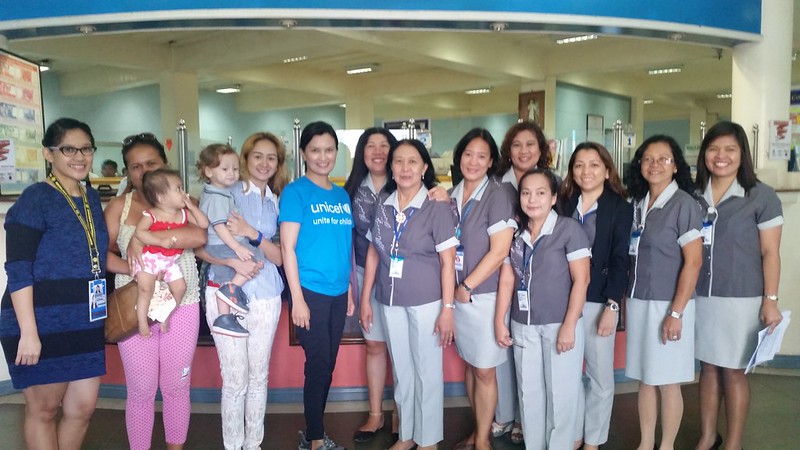 At the Naga Water District, where it is a breastfreeding-friendly workplace. 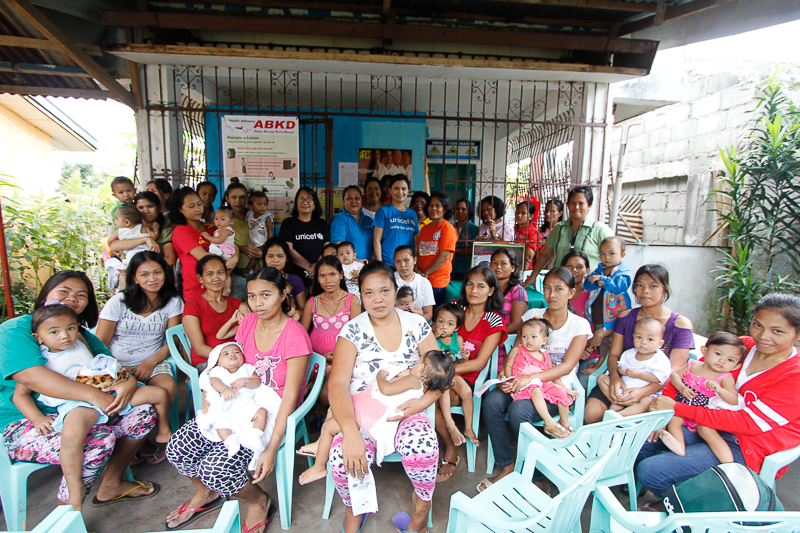 Meeting the mothers of Barangay Panicuason, Naga. Photo by UNICEF2015/ACDimatatac

I’m sharing photos of the trip from UNICEF’s gallery. All photos by UNICEF2015/ACDimatactac.

I saw the smallest little infants at the NICU. It was good to see a public hospital with a strong commitment to breastfeeding. They counsel mothers on how to express milk if their preemie baby is too small and still in the NICU.

With the doctors of the NICU at the Bicol Medical Center.

At the Bicol Medical Center.

The doctors of Bicol Medical Center showing me their storage for pasteurized breastmilk at the Human Milk Bank.

A preemie, newly discharged from the neonatal intensive care unit of Bicol Medical Center. All the babies in NICU are given mothers’ breastmilk only.

At Barangay Concepcion in Naga, with volunteer peer counsellors. They go on house to house visits to help encourage and coach new moms to breastfeed.

A volunteer peer counsellor visits a new mother in Barangay Concepcion. Mothers need a lot of support when breastfeeding – from family members and the community.

Talking with the women of Barangay Panicuason.

At SM Naga Breastfeeding Station. SM has been supporting breastfeeding by providing breastfeeding rooms where mom can comfortably nurse their babies or pump/express milk. The Expanded Breastfeeding Promotion Act of 2009 or Republic Act 10028 mandates working mothers be given the space to breastfeed or express their milk, and should be allowed paid breaks (an extra 40 minutes a day) during which breastfeeding or expression of milk may be done.

The logbook at the lactation room at Naga People’s Mall (Public Market).

At the Naga public market, officially known as the Naga People’s Mall. I gave brief talk to the community’s breastfeeding and pregnant moms. I shared with them that I had chosen to exclusively breastfeed my babies the first 6 months and continue with complementary feeding after. I wanted them to know that this isn’t just something we advocate for the poor and marginalised, that even women in large urban areas around the world choose to breastfeed because of the health and nutritious benefits.

At the Naga public market, officially known as the Naga People’s Mall. Here volunteer peer counsellors share tips on how to breastfeed easily and the types of food babies 6 months and older should be eating. Instead of store-bought powdered cereals, babies 6 months and older should eat real and whole foods like pureed fruits and vegetables. They were also encouraged to plant backyard vegetable gardens.

One of the breastfeeding moms at the Naga People’s Mall (public market) breastfeeding room. They also have a small refrigerator for moms who have to express milk while working.

At the Naga Water District. They have set up a breastfeeding room for lactating mom employees and guests. The Expanded Breastfeeding Promotion Act of 2009 or Republic Act 10028 mandates working mothers be given the space to breastfeed or express their milk, and should be allowed paid breaks (an extra 40 minutes a day) during which breastfeeding or expression of milk may be done.

Our first stop was a meeting with Naga City Mayor John Bongat. The city has been an early supporter of breastfeeding and maternal/infant nutrition.

The part of my UNICEF trips that I love the most. Meeting cute babies. This was at the beastfeeding centre at Naga City Hall.

Feel free to share your breastfeeding story in the comments below. I love hearing about them.